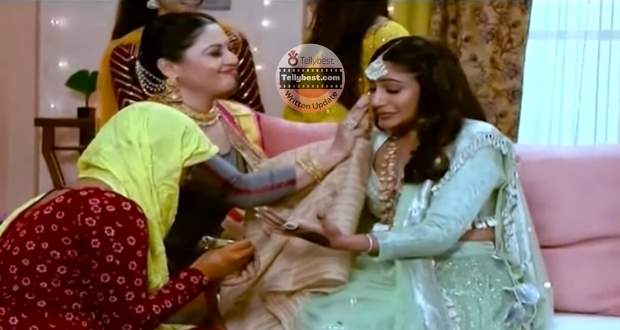 Today's Sherdil Shergill 6th December 2022 episode starts with Rajkumar asking Priyanka what she is wishing to God to which she says that she wishes that nothing happens like what happened in Anisha’s case.

Rajkumar guarantees that nothing like that will happen again as he has his whole family by his side.

After Pankhudi, Priyanka, and her husband leave, Rajkumar asks Nirali why she looks so sad and asks her to smile.

Rajkumar tells Nirali that even though Manmeet is a bit different from them, she will eventually blend with their family.

As Rajkumar mentions Anmol, Nirali’s expression turns sourer but she forces a smile and acts as if she is happy.

Meanwhile, Manmeet asks Gunjan what her mother-in-law was scolding her about but Gunjan covers up the matter.

Gunjan tries to make Manmeet believe that her mother-in-law is very nice to her but Manmeet does not buy her words.

Manmeet clearly says that she will not spare Gunjan’s mother-in-law if she hears something suspicious.

Manmeet enters with her parents and relatives wearing a beautiful white dress and looking like a princess.

After the two families greet each other, Radhe clicks a picture of the entire family with Manmeet, Rajkumar, and Rajkumar at the center.

Priyanka and Pankhudi ask Vidya to hand over Anmol to them for some time as they need to show him the garden.

Manmeet asks Vidya to accompany them but Priyanka says that there is no need and leaves with Anmol.

Rajkumar asks Manmeet to calm down as Pankhudi and Priyanka can take care of Anmol very nicely.

Holding Manmeet’s hand, Rajkumar asks her to talk about something else.

Meanwhile, Priyanka, Pankhudi, and Priyanka’s husband discover that the Scorpion is missing from the box and begin to search for it when Bhairav comes there.

They leave with Anmol after presenting some excuse to Bhairav and giving him back to Vidya.

After Raj and Manmeet give a romantic performance and make the whole family dance, Rajkumar comes to get Anmol to join the dance.

Rajkumar notices the huge scorpion on Anmol’s cradle and widens his eyes in horror while Priyanka and Pankhudi shout about the matter to the entire crowd.