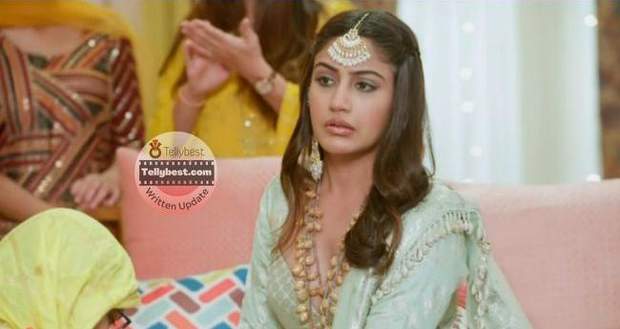 Manmeet rushes toward Anmol to save him but Rajkumar removes the scorpion with his bare hands before she reaches.

Rajkumar picks Anmol in his arms and checks if something happened to him along with Manmeet.

Priyanka’s husband notices the scorpion on Priyanka’s shoulder and screams in terror followed by Pankhudi.

Priyanka screams on seeing the scorpion on her shoulder and asks someone to remove it from there.

Ajeet helps Priyanka, removes the scorpion from her shoulder with his stole, and informs everyone that everything is fine.

Manmeet leaves with Anmol with Rajkumar going after her while Bhairav apologizes to Ajeet for such an incident.

Ajeet asks Bhairav not to apologize as he did not do anything deliberately and accidents can happen anytime.

Meanwhile, Rajkumar asks Manmeet to relax as nothing happened to Anmol or any other person.

Manmeet thanks Rajkumar for saving Anmol’s life to which Raj says that he will cut ties with Manmeet if she says sorry again.

Manmeet says that she is ready to divide her duty of raising Anmol with Rajkumar as she feels he is his perfect father.

Ajeet and Puneet leave the house after bidding goodbye to Bhairav’s family as they have many preparations for the next day.

Later, Manmeet apologizes to Anmol for not taking care of him and tells him that they are “Sherdil Shergills” who know how to fight.

Puneet tells Ajeet that she expected Rajkumar and Anmol’s DNA test results to come positive while Ajeet asks her why she thinks so.

Gunjan gets threatened by her mother-in-law to confirm their deal with Bhairav if she wants to live with their family.

At the same time, Bhairav confronts Priyanka and asks her why she did such a thing as release the scorpion.

Bhairav says that he will tear apart Rajkumar and Manmeet so that the marriage gets canceled by them and asks the family members to put their faith in him.

Rajkumar calls Manmeet and flirts with her by calling her “Jaan”.

Manmeet first says that Anmol will always be there between them but then says “I love you” to Raj making him happy.

The next day, Manmeet gets groomed up for her marriage and performs a ritual of breaking a glass before she leaves for Raj’s house.

Priyanka gets a new idea of breaking the marriage after she hears the word “kidnapped” from others.

© Copyright tellybest.com, 2022, 2023. All Rights Reserved. Unauthorized use and/or duplication of any material from tellybest.com without written permission is strictly prohibited.
Cached Saved on: Wednesday 25th of January 2023 12:44:42 PMCached Disp on: Monday 6th of February 2023 02:03:26 AM