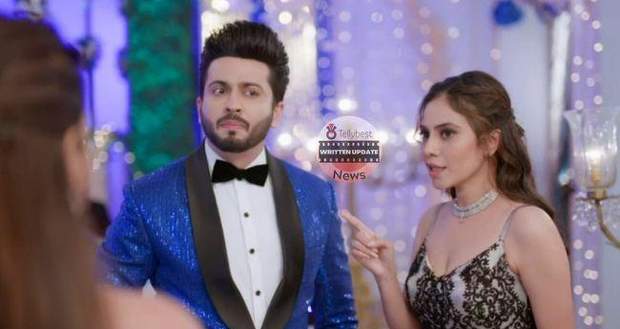 Today's Sherdil Shergill 7th November 2022 episode starts with Manmeet coming into her house and spotting Rajkumar with the gun which makes her misunderstand the situation.

Landing a tight slap on Rajkumar’s face, Manmeet asks him to get out of the house before she calls the police.

Rajkumar mistakenly pulls the trigger of the gun and injures one of the goons.

Rajkumar leaves after Manmeet pushes him away in anger while Puneet tries to stop Manmeet from reacting like that.

Ajeet spots Rajkumar holding onto a gun while leaving and rushes inside to check if everything is fine.

Manmeet tells Ajeet how Bhairav and Rajkumar schemed the entire plan to take away Anmol but Puneet stops her.

Puneet and Vidya inform Manmeet and Ajeet that Rajkumar was the one who saved them and took out the gun to terrorize the goons.

Manmeet realizes how she acted with Rajkumar and feels bad about it.

Meanwhile, Bhairav asks Murari about Anmol not reaching the lab to which Rajkumar answers while entering the house.

Everyone gets shocked to see the gun in Rajkumar’s hand and asks him what he has done with it.

Rajkumar tells Bhairav that he shot one bullet from that gun and asks him why he tried to kidnap Anmol forcefully.

Bhairav lands a harsh slap on Rajkumar’s face and asks him how he is able to argue with his father.

Rajkumar tells Bhairav that even though he respects and loves him as his father, he will not tolerate Bhairav trying to harm Manmeet or Anmol.

Holding the gun at his forehead, Rajkumar tells Bhairav that he will be standing in front of the bullet whenever he tries to go near Manmeet.

On the other hand, Ajeet decides to call the police so that he can put Bhairav Singh behind the bars but Puneet stops him as Rajkumar will also have to go to jail.

Puneet asks Manmeet to allow the DNA test as it will help her and Rajkumar to get rid of all the allegations.

Manmeet strictly denies it and tells Puneet how she was alone from the moment of signing the form of IVF to delivering the baby.

Later, both Manmeet and Rajkumar reminisce about the events caused earlier and regret being rude to each other.

© Copyright tellybest.com, 2022, 2023. All Rights Reserved. Unauthorized use and/or duplication of any material from tellybest.com without written permission is strictly prohibited.
Cached Saved on: Monday 21st of November 2022 05:07:35 AMCached Disp on: Thursday 1st of December 2022 02:40:59 AM