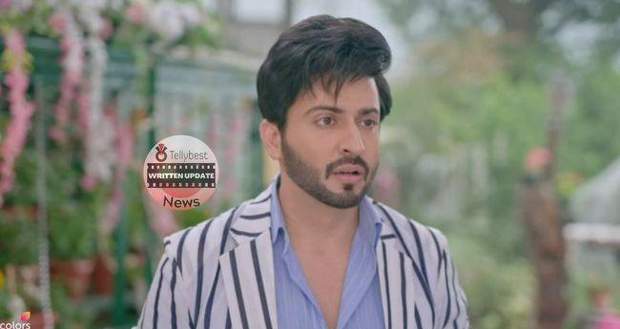 Today's Sherdil Shergill 7th October 2022 episode starts with Rajkumar telling Manmeet’s family that he will sleep in the guest room.

Hearing this, Manmeet’s uncle announces it’s okay for Raj to sleep alone since they already have a baby.

Meanwhile, Rajkumar gets a call from Nikki who calls Rajkumar “janu” much to everyone’s shock.

Manmeet quickly takes the phone from him and tells Nikki that “Anmol janu” is okay and cuts the call.

After the call, Manmeet informs everyone Raj’s sister calls Anmol as "janu" which clears up their confusion.

Later at night, Ajeet joins Manmeet outside the house and they bond with each other.

Puneet informs Ajeet in the room that he needs to share his bed with Raj as he is not Manmeet’s real husband.

Hearing this, Ajeet makes a sour face but Puneet strictly orders him to adjust as she cannot let Manmeet share a room with Raj.

On the other hand, Manmeet breaks down in tears while telling Raj that Ajeet is yet to accept Anmol as his grandchild.

Seeing Manmeet so emotional, Raj tries to cheer her up by announcing that Ajeet will accept Anmol as he is his grandson.

He even puts a hand on Manmeet’s shoulder to comfort her while Puneet witnesses the entire scene and happily runs inside.

Once inside, Puneet tells Ajeet that she is sure Raj and Manmeet are an actual couple so they should give them some privacy.

When Ajeet refuses to believe, Puneet explains that Manmeet hired Raj to be her fake husband so he can spend some time with them but Raj has no reason to play this role.

Finding this statement logical, Ajeet nods in agreement and Puneet announces they should let Raj sleep with Manmeet and orders Ajeet to treat Raj as his son-in-law.

Before falling asleep, Ajeet imagines Raj as his son-in-law and yells a big no.

Meanwhile, Raj and Manmeet go to wake Puneet up so Raj can sleep with Ajeet but Puneet does not respond.

After calling out Puneet’s name several times in a whisper, Manmeet and Raj accept defeat and walk away.

Hearing the voice, Ajeet urges Puneet to tell Manmeet that they know the truth but rolling her eyes, Puneet announces that sometimes it is better to stay silent.

Going back to her own room, Manmeet orders Raj to fall asleep on the other side of the bed quietly.

On one hand, Ajeet is worrying about Raj sleeping with Manmeet, and on the other hand, Raj notices Manmeet's sleepy figure and decides to walk away quietly.

© Copyright tellybest.com, 2022, 2023. All Rights Reserved. Unauthorized use and/or duplication of any material from tellybest.com without written permission is strictly prohibited.
Cached Saved on: Monday 21st of November 2022 08:23:58 AMCached Disp on: Thursday 1st of December 2022 01:24:20 AM