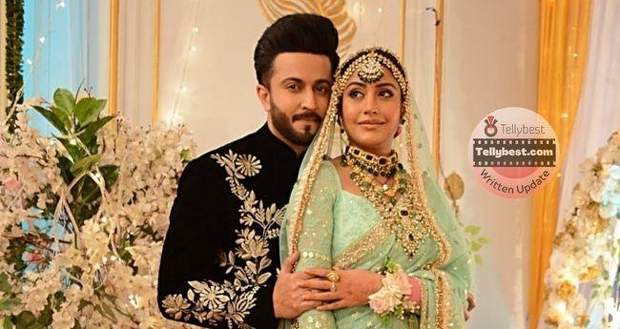 Today's Sherdil Shergill 8th December 2022 episode starts with Ajeet wishing that Manmeet never catches any evil eye and he gets a little sentimental and says that he has always thought of this day but it came so soon.

Ajeet further says that Manmeet will always be a Shergil and hopes that she stays like this even in her new house and Manmeet hugs him.

Meanwhile, at the Yadavs’, stunning Rajkumar gets out of his room and meets his father while Bhairav proudly praises him.

Bhairav tells Raj that he has always prioritized Raj’s happiness and will continue to do so and Raj hugs him.

Back at the Shergil’s, Manmeet tells Ajeet to wipe all his tears and Gunjan's mother-in-law tells her that she will take care of Anmol as she has no other work.

Raj’s eyes fall on the beautiful bride and he gets stubbed just seeing her like that.

Manmeet remembers the phone call where Raj tells her that she is very unromantic so to surprise him she decides to sing ‘Makhana’ and performs for Raj but suddenly sees that Murari is present at the wedding.

Murari and Bhairav step up to Manmeet and he apologizes to Manmeet for whatever happened and lets him stay at the wedding.

Manmeet tenses up seeing him play with Anmol but Raj takes her inside.

Outside, Puneet tries to calm Anmol and Gunjan’s mother-in-law butts in and tells them that she will take care of Anmol.

After a while, Gunjan’s mother-in-law starts scolding Anmol making him cry even harder.

Inside there is a grand entrance for Raj and Manmeet and Gunjan’s mother-in-law tells Gunjan to handle Anmol.

Later Priyanka introduces herself to Gunjan and takes Anmol from her.

Meanwhile, Pankhudi takes Murari away and tells him how he could dance like that when he has been insulted so much.

To this Murari replies that his anger has no bounds right now but he has to cooperate till people trust him again because if not then he will be absconded again.

He further asks how they could let Manmeet marry Raj but Pankhudi tells him that Priyanka won’t let this marriage happen so just wait and watch.

Raj and Manmeet enter and sit in the mandap while Priyanka plots to hide Anmol in a basket of flowers.

Bhairav sees Priyanka and asks her what is she doing out while she tells him that she hates it when he doubts her and they go inside.

Inside the wedding ceremony is taking place and both Raj and Manmeet remember their happy moments together.

Meanwhile, Priyanka's husband gets distracted by food and leaves the basket in which Anmol was put and the workers take the basket away from the venue.

© Copyright tellybest.com, 2022, 2023. All Rights Reserved. Unauthorized use and/or duplication of any material from tellybest.com without written permission is strictly prohibited.
Cached Saved on: Thursday 26th of January 2023 02:12:29 AMCached Disp on: Monday 6th of February 2023 05:29:17 AM