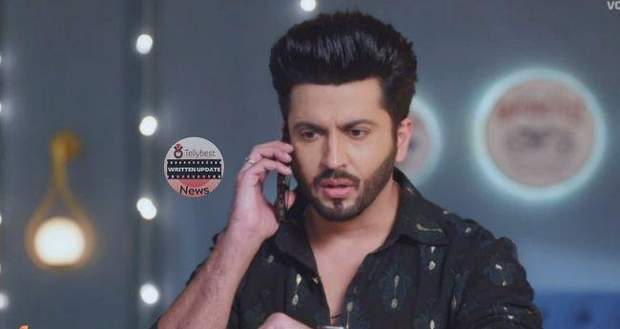 Radhe tells Rajkumar that he drinks alcohol to cure his headache and shows Rajkumar his bottle from the cupboard.

Rajkumar nods in agreement and takes away the whole bottle with him.

Meanwhile, Murari informs Bhairav that Ajeet has gone to the police station and the ACP is on the other end waiting to talk to him.

Bhairav talks with the ACP and gets to know about Ajeet’s wish to lodge a complaint against him and asks them to wait.

On the other hand, Manmeet talks with Puneet and apologizes for getting angry at her earlier.

Puneet does not mind Manmeet’s arrogance but asks her to apologize to Rajkumar as she behaved very harshly toward him.

Puneet says Rajkumar picked up a gun to save them by going against his family while she just outcasted him.

Manmeet tells Puneet that she should meet with Rajkumar and tell him sorry in person.

As Manmeet realizes that the day is Tuesday, she instantly goes to Kukoo’s Club to attend Rajkumar’s show.

Rajkumar comes out in a drunk state and begins to crack emo jokes about how his break got broken in love.

As Rajkumar fails to control himself with the liquor, he falls to the ground in front of the audience.

Manmeet rushes to him and tries to handle him from falling asleep while the manager warns her that Rajkumar’s plan of going to Sydney will go to waste this way.

Manmeet asks Rajkumar to wake up while resting his head on her lap.

Rajkumar opens his eyes and sees Manmeet which makes him happy.

Raj stands up and tells Manmeet that he missed her and was feeling unwell as he did not get to see her.

Manmeet holds onto Rajkumar while he tells her that he wants to say something important to her.

Rajkumar says that he is head over heels for Manmeet and has fallen in love with her while pulling her closer to him.

Manmeet blushes slightly on hearing Raj’s confession and hears him recalling their moments together.

Meanwhile, Bhairav tells Ajeet to lodge a complaint against him as Rajkumar needs to spend a few days in jail.

Ajeet restrains from filing an FIR as he does not want Raj to go to jail.

After Ajeet leaves, the police hear the matter from Bhairav and tells him that he does not need Anmol to be present for the DNA test.

Manmeet brings Rajkumar home with her and lays him on the bed while Raj asks her to answer his question.

Puneet asks Manmeet what Rajkumar is talking about but she distracts her with another matter.

The next day, Manmeet wakes up Rajkumar by reminding him that he is in her house which shocks Rajkumar.

© Copyright tellybest.com, 2022, 2023. All Rights Reserved. Unauthorized use and/or duplication of any material from tellybest.com without written permission is strictly prohibited.
Cached Saved on: Monday 21st of November 2022 06:33:10 AMCached Disp on: Wednesday 7th of December 2022 12:51:25 PM