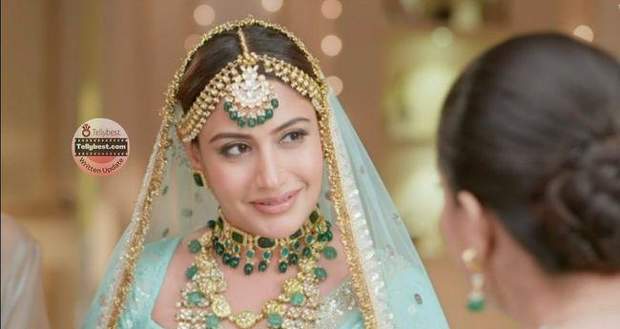 Today's Sherdil Shergill 9th December 2022 episode starts with Bhairav calling Murari to come and sit next to him so he can talk to him.

Bhairav asks him if he’s happy or not and Murari says of course he is now that he is out of prison just like Bhairav promised.

Murari is not pleased with the wedding

Further Bhairav asks if he is happy with the wedding or not to this Murari does not answer but his face did look displeased.

Bhairav tells Murari that he enjoys making his enemies suffer and looks at Manmeet as if she is his enemy, he then says that there should be no trouble in the wedding so Murari has to keep an eye on everything.

Priyanka and Pankhudi meet Pri's husband and ask him about the basket which had Anmol.

Priyanka's husband tells them that the workers took the rest of the baskets with them as they were just lying there.

She gets really angry at her husband and calls him irresponsible.

Inside the house, Ajeet looks for Gunjans' mother-in-law and asks her where Anmol is.

Gunjan's mother-in-law munches on the kachoris and tells him that Anmol was crying too much so she gave him to Gunjan.

Frustrated, Ajeet starts to look for Gunjan and asks her about Anmol.

To this, she says that Anmol is with Priyanka, Ajeet tells her that she shouldn't have given Anmol to Priyanka and asks her to find Priyanka with him.

Outside the hall, Pankhudi scolds Priyanka and sees that Brejesh is walking by with a basket.

So they stop him and check the basket, with no luck Priyanka asks him where are the rest of the baskets.

He tells them that they were extra so they were sent away in the truck some time ago. Pankhudi panics but Priyanka says that their job is already done.

She explains to Pankhudi that now Anmol is gone and the wedding won't take place at all.

At the same time, Ajeet and Gunjan come from behind and ask Priyanka where Anmol is so very cunningly she lies that Anmol is sleeping in his cart.

Ajeet feels relieved and goes from there while Gunjan decides to check the cart and sees that Anmol is not there.

Manmeet is unaware of Anmol's absence

On the other hand, Manmeet looks here and there to see Anmol but is unable to find him so she asks Puneet about Anmol.

Ajeet tells Puneet that Anmol is just sleeping in his cart.

Manmeet calms after hearing this and focuses on her wedding.

Then Gunjan and Ajeet look for Anmol and pandit Ji calls for them so Puneet goes to them and finds the truth about missing Anmol.

Meanwhile, Murari and Pankhuri are asked to do the gathbandhan for Raj and Manmeet which upsets Manmeet a little.

While this happens Priyanka tells there should be a selfie with Anmol and she reveals that Anmol is missing.

Manmeet and Raj stand up and the gathbandhan breaks and falls on the floor.

All of them start to look for Anmol and Manmeet starts to panic.

Meanwhile, the worker who took the basket away gets hit by a scooter and the basket flies away from him and falls to the ground.

Outside, Pankhuri warns Priyanka that her name should not come out in the open and that CCTV footage has to be removed.

The auspicious time is passing by quickly

Meanwhile, pandit Ji says that the bride and groom have to complete the wedding or else the shubh muhurat will end.

So, Nirali tells this to Bhairav and he gets heavy-minded.

Manmeet looks for Anmol like a madwoman and Raj tries to calm her.

Seeing Raj and Manmeet in a room, Bhairav and Murari come and tell her that they will find Anmol no matter what.

Enraged Manmeet starts to accuse Murari of kidnapping Anmol but Raj calms her.

Both Bhairav and Murari leave and Raj embraces Manmeet and assures her that Anmol will be fine.

Later, Manmeet interrogates Gunjan and her mother-in-law and Gunjan tells Manmeet that Priyanka was the last person to keep Anmol.

Meanwhile, Priyanka removes the CCTV footage from the computers.

Aggravated, Raj screams for his sister which highly upsets Nirali.

Manmeet asks Priyanka why she didn't give Anmol to someone but Priyanka insultingly says she did what she thought was right and if Manmeet can't handle her child maybe she should have left him at home.

Priyanka tells Bhairav to defend her but they don't listen to her.

Raj says they should look for the CCTV footage and find out about Anmol.

Later, Priyanka asks Nirali why she didn't defend her so Nirali tells her that she knew that it was Priyanka's doing so she kept quiet.

Priyanka does a good job

Laughing quietly, Pankhudi asks her how she can lie so easily and what will she do when the CCTV footage is found.

Priyanka tells her sister that she removed the footage and that she doesn't care about Anmol at all as the muhurat has already ended.

In the CCTV footage room, the computers are off.

On the other hand, Gunjan's mother-in-law tries to praise Gunjan and makes up a story that Gunjan has stolen Anmol to get 2 crores.

But Gunjan denies this and Ajeet overhears them and tries to ask about it but ends up with just jibber jabber.

Meanwhile, Raj suggests that police have to be called because the evidence has clearly been destroyed.

On the other hand, the warehouse where Anmol was taken starts to burn.

Anmol gets caught in the fire

Later, Raj says that police are necessary as many family members have been up to many terrible things.

Manmeet says that she just wants her child and she doesn't care for anyone else, Nirali gets upset with these words and someone tells her that the store is on fire.

Manmeet and Raj rush to the store and hear Anmol crying.

Raj breaks the door and looks for Anmol amongst the fire and finally finds him.

Puneet asks Nirali that now they can resume the wedding but Nirali says that it's not possible as the muhurat has ended.

Everyone says the same and tells Rk to wait but he asks Manmeet what she wants to do.

© Copyright tellybest.com, 2022, 2023. All Rights Reserved. Unauthorized use and/or duplication of any material from tellybest.com without written permission is strictly prohibited.
Cached Saved on: Thursday 26th of January 2023 06:57:22 PMCached Disp on: Wednesday 1st of February 2023 06:15:57 PM