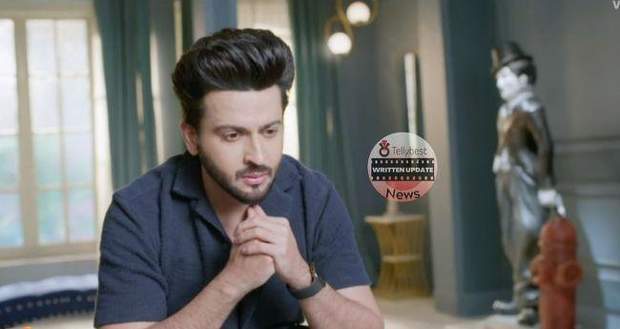 Today's Sherdil Shergill 9th November 2022 episode starts with Manmeet opening the curtains to her window while Rajkumar wakes up annoyed.

Rajkumar gets shocked to see her and asks how he ended up in her room while she tells him that he would still have been hungover at the bar had she not brought him home.

Rajkumar asks her if she wanted to help him after slapping him and insulting him at the bar.

Manmeet reveals to him that she had come to the bar to apologize to him.

Rajkumar tells her that she could have apologized to him on a call and asks her why she came to the bar herself.

However, Manmeet avoids the topic and tells him that he should go home.

Before Manmeet can leave the room, Rajkumar stops her and tells her that he remembers what happened last night and again expresses his love for her while being completely sober.

On the other hand, Manmeet's mother Puneet is eavesdropping on their conversation and happily wakes up her husband to inform him of the door.

Manmeet tells Rajkumar that he should go home while Rajkumar says that he won't leave without an answer from her.

She reminds him that his marriage is fixed with Anisha while Rajkumar reveals that he had intended to make her confess using the marriage and had hoped that she would stop him.

Rajkumar makes Manmeet sit and tells him that wants to spend the rest of his life with her and that his father has even thought of the names for their children, Yuvraj Shergill Yadav if a boy.

Manmeet feels conflicted while Rajkumar gets on his knees and asks her for the third time if she would marry him while holding her hand dearly.

Finally, Manmeet tells him that she needs time and he tells her that he knows she will say yes but requests her to give him an answer by the evening.

Rajkumar suddenly comes back and hugs Manmeet before leaving while he gets surprised by Manmeet's parents at the door.

He hugs Manmeet's mother and leaves while she goes to Manmeet and asks her why she didn't accept the proposal.

Manmeet tells her that she needs time while her father tells Manmeet's mother to give her some alone time.

Back at Rajkumar's house, Nirali questions Murari why he didn't go to the police station with Bhairav.

Murali reveals that Bhairav doesn't take him anywhere anymore while Choti (Priyanka) runs to Bhairav and asks him if he's okay.

Nirali questions Bhairav about his reason for being called to the police station and he reveals that it was because of the DNA test.

On the other hand, Manmeet thinks about Rajkumar's proposal and about the DNA test.

Further, she calls Rajkumar and tells him to meet her at the Kuku's club for her answer.

Rajkumar happily gets ready to see Manmeet and reaches Kuku's Club where he sits at his usual chair on the stage for the standup comedy.

He announces the love of his life Manmeet to everyone and brings her on the stage as she tells him that she loves him and asks him if wanted to hear this from her.

The lights turn away and Rajkumar gets shocked to see his family members while Manmeet removes her hand from his grasp.

Manmeet tells him that she does not love him and also does not want to marry him while everyone looks on in anticipation.

Manmeet walks to Bhairav and tells him that she needed to do this in front of everyone as the secret has caused a lot of problems for everyone in the past.

Manmeet states that Rajkumar is mentally unstable and states that he is a compulsive liar.

Priyanka tells Manmeet to watch her mouth while Manmeet reveals that Rajkumar does standup comedy twice a week by lying to them.

© Copyright tellybest.com, 2022, 2023. All Rights Reserved. Unauthorized use and/or duplication of any material from tellybest.com without written permission is strictly prohibited.
Cached Saved on: Monday 21st of November 2022 01:46:51 AMCached Disp on: Wednesday 7th of December 2022 04:22:51 PM