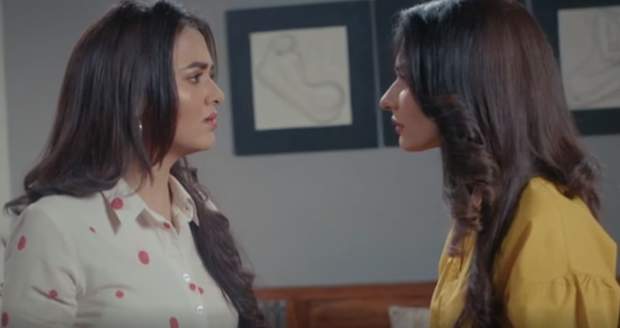 Pari says if she knew she would have backed off and tells she will not come between Ruhaan and her.

Mishti lies that she doesn’t love Ruhaan and says Ruhaan is not his type.

Mishti tells Pari that Ruhaan and she are very different and she can’t love him.

Pari says Mishti is doing a drama of not loving Ruhaan and that she can’t deny the truth.

Pari shows Mishti the photo of her and Ruhaan romancing.

Mishti manipulates Pari by showing her pictures of Ruhaan with other.

Mishti messages Ruhaan that what she is to him.

Pari tells Mishti that Veer was the one to send the photo to her.

Mishti lies that she was just doing a photo shoot with Ruhaan.

Mishti says Veer is trying to manipulate Pari against her.

Ruhaan calls Pari instead and asks about which wine she wants.

Mishti talks to Ruhaan on phone and asks him what Pari is for him.

Ruhaan says Pari is his good friend and he finds piece with him.

Mishti asks Ruhaan what she is to him.

Ruhaan says that she is the Jungli sister of his good friend.

Ruhaan thinks something is wrong with Mishti.

Mishti asks Pari that if Ruhaan has proposed her.

Pari says he wrote I love you card but Daadi found it instead.

Mishti asks Pari to promise her not to tell Ruhaan about anything.

Mishti says she is drained and needs some fresh air.

© Copyright tellybest.com, 2020, 2021. All Rights Reserved. Unauthorized use and/or duplication of any material from tellybest.com without written permission is strictly prohibited.
Cached Saved on: Monday 6th of December 2021 05:59:43 PM