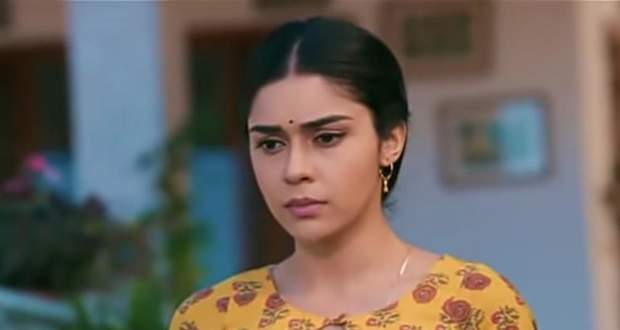 Today's Sirf Tum 16 November 2021 episode starts with Ranveer brings the girl in front of everyone while Riya and his friends reach there.

Ranger asks the girl that she wanted to give him a good luck kiss and tell her to kiss him in front of everyone but she runs away from him.

He runs after her while the girl bumps into Suhani who has her admission form in her hands near the stairs.

She in turns bumps into a stool and her phone falls while Ranveer saves her from falling.

Suhani sees her form torn and starts crying while Ranveer is about to go after the girl but stops hearing Suhani's cries.

Meanwhile, Riya threatens her friend to not do it again while she tells her to make their relationship exclusive.

Suhani tells Ranveer that her admission form is torn without looking at him and he brings two forms for her and leaves for the match after giving her phone back to her.

The host welcomes the chief guests, Vikrant Oberoi and his wife Mamta Oberoi while telling the team captains Ansh and Ranveer to welcome them.

Ranveer removes his shirt as it is stained and gives the flowers to his mother, Mamta instead of his father, Vikrant as his friends bring another jersey for him.

Vikrant tells Mamta that they should go and behaves coldly towards her while they meet Rakesh in the parking ground and discusses their business while telling him to talk to him in the office the next day.

Ansh tells his teammates to provoke Ranveer and make him lose the match after which one teammate talks to him about his sister and makes him mad.

Ranveer starts beating the guy and a crowd forms around them while others try to stop him.

Suhani sees Riya and goes towards the centre of the crowd but falls before Ranveer as she gets pushed by some teammates.

Ramveer stops his punch midair while she gets scared and runs away as he looks at her.

© Copyright tellybest.com, 2020, 2021. All Rights Reserved. Unauthorized use and/or duplication of any material from tellybest.com without written permission is strictly prohibited.
Cached Saved on: Thursday 2nd of December 2021 12:50:17 AMCached Disp on: Monday 6th of December 2021 08:01:34 AM