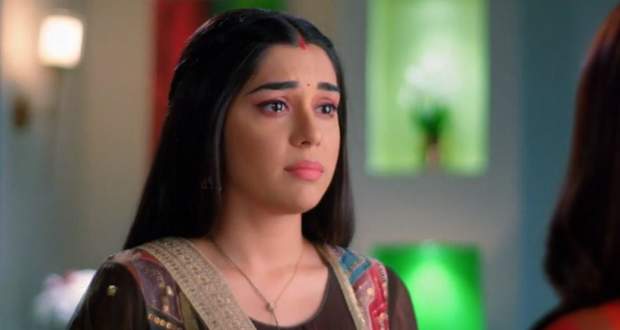 Suhaani daydreams about going to Ranveer with courage and asking him to put the Mangal Sutra she has kept with herself around her neck.

Suhaani smiles and closes her eyes.

When her eyes open, Suhaani realizes that she was daydreaming and looks at herself in the mirror.

Suhaani knows the heavy importance of being a married woman and adorning a Mangal Sutra.

However, Asha’s dependence on Suhaani makes Suhaani dither from directly telling Ranveer that she wants to be with him.

Suhaani does walk up to Ranveer’s room and asks him the reason why he was not present the night they were about to get married.

Ranveer’s mind does a flashback to when Ansh hit Ranveer on his head and Ranveer fell unconscious.

Ranveer shakes his head but Suhaani wants to know the reason.

Ranveer ends up yelling at Suhaani’s persistence and she cries a little.

On the other hand, Ansh goes up to Vikrant and asks him to transfer money to his account every month.

Vikrant denies doing so. Ansh then threatens his father that he will out Vikrant’s secret of having an illegitimate affair with his mother to everyone.

But Vikrant does not care.

Ansh then brings up the conversation Vikrant had with Riya’s father about a business deal that needs to be followed and for Ranveer and Riya to get married.

This shuts Vikrant up and he agrees to do Ansh’s bidding.

Suhaani’s mind is somewhere else and Asha interrupts Suhaani’s flow of thoughts when the milk overflows due to the heat.

Asha hugs Suhaani and asks her why she seems so zoned out.

Suhaani doesn’t say a thing. Meanwhile, Riya comes to visit Ranveer and asks him to marry her.

Suhaani hears this and leaves with a heavy heart, followed by Asha who can sense Suhaani hurting.

However, Suhaani does not hear Ranveer telling Riya that he loves Suhaani and no one can take Suhaani’s place in his heart and life.

Asha then requests Suhaani try to accept Ansh from her heart even though she did not want to marry Ansh in the first place.