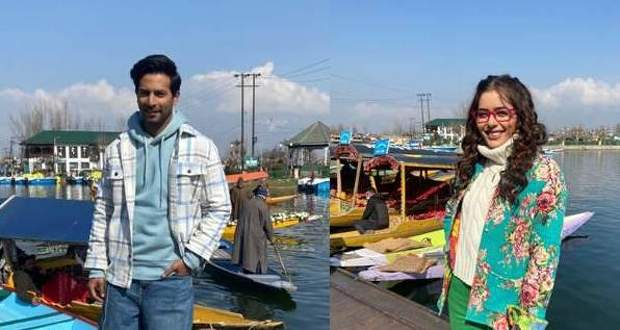 Today's Spy Bahu 15th March 2022 episode starts with Sejal praying to God for her internship to go smoothly as it is her first time to go to Delhi alone without her family.

Saras wishes Sejal all the best and boasts about his daughter to Baa.

As the car arrives, Saras and Mrinal bid their goodbyes to Sejal being a bit emotional.

On arriving in the city of the capital, Delhi, Sejal gets awestruck seeing the huge mansion and the grand decoration.

Acting nervous and clumsy as she is, Sejal somehow catches up with her team of waiters and waitresses.

However, seeing Sejal wearing leggings under the skirt, the manager shouts at her commanding her to change it instantly.

On the way to changing and coming back, Sejal ends up falling inside Yohaan’s room and gets intimidated by the things there.

She spots a photo frame and was looking at it when Yohaan enters the room making Sejal run away instantly.

Shalini throws a tantrum on the faults in decoration which scares Sejal.

At the manager’s command, Sejal rushes to clean the pool water when suddenly Yohaan enters making Sejal fall and get her skirt torn.

As Yohaan realizes the presence of another person there, he exchanges conversation with Sejal without seeing her face.

However, Sejal runs away with Yohaan’s robe despite him calling her to stop.

The party starts, Arun and Vira Nanda enter their anniversary function, and Arun introduces his guest to his family.

When the family gathers to take a family photo, Shalini removes the cloth from Drishti’s hand revealing her infection but gets snubbed by Yohaan.

Yohaan enters mocking the family members in front of all the guests and exits after insulting Arun dressed in just a towel.

Later, Shalini fires Sejal for bumping into her. As Sejal was leaving the house, she spots a guy with a tattoo on his neck who was talking about harming the reputation of the Nanda family.

She chases him but fails to catch him, the in-charge person notices the cam pen and asks Sejal to wait in their office.