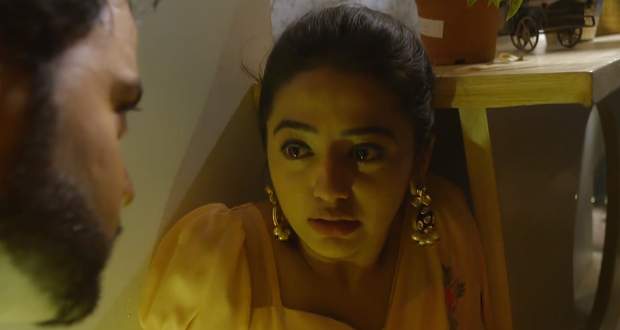 Today's Sufiyana Pyaar Mera 21 Sep episode starts with Kainat talking to her mother Zehnab and telling her about Saltanat suffering for her crimes. Meanwhile, Jugal compliments both his mother-in-law and wife.

They all leave Saltanat alone and lock the door from outside. Later, Saltanat tries to video call to see Krish’s performance.

At the same time, Jugal opens the lock and enters the empty house with only Saltanat. Saltanat feels someone’s presence outside.

She discovers her phone is missing and deduces someone has entered in the house. She comes in the hall and sees some guy sitting on the sofa.

She gets shocked to see Jugal’s face and asks him not to come near her. Meanwhile, Nadeem is asked for help from some man whose daughter is molested by some goons.

Saltanat tries to escape from Jugal but he catches her each time. She is about to fall when Jugal catches her in the same way Kainat caught her in their last encounter.

Saltanat remembers flashes of her past while Jugal catches her and ties her feet. At the same time, Zaroon asks the girl why she doesn’t fight back.

He gives the girl a bat and tells her to fight them while Saltanat gets angry and attacks Jugal. She hits him with slippers and then slaps him.

Sneha also comes and starts hitting her husband while Saltanat moves out of the house. Saltanat reaches in front of her old house and regains some blurred memory.