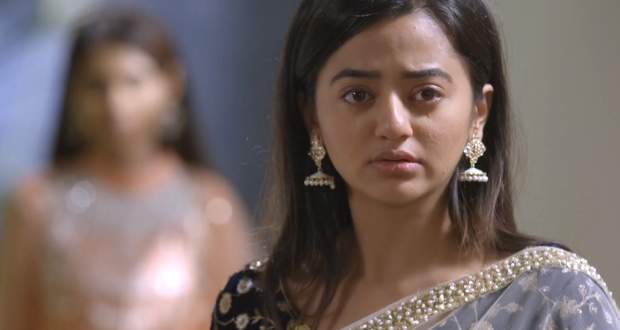 Today's Sufiyana Pyaar Mera 28 Sep episode starts with Saltanat entering her old home with some mosque people. She regains some of the blurred old memories in the house.

Meanwhile, Madhav is adamant to get Kashish aka Saltanat back. At the same time, Sneha wants Kainat to meet her as soon as possible.

Kainat feels someone’s presence but later finds Zaroon standing in front of her. She tells him she is going to Dargah and leaves.

Saltanat reaches Zehnab’s room and sits beside her. She feels a strong connection with her while Zehnab is also stunned.

She admits that she is Kainat and has done mistakes while Zehnab wants to tell her the truth. Later, Kainat learns from Sneha that Saltanat has gone to Shash Manzil.

Kainat gives a knife to Zaroon and wants him to attack Saltanat. Meanwhile, Saltanat is confused and wants to know if Zehnab also hates her.

Saltanat comes out of Zehnab’s room and finds Kainat and Zaroon standing on either side of her. At the same time, Krish prays to god for Saltanat’s well being.

Zaroon is about to attack Saltanat when Zehnab takes her in the room and locks the door. Zehnab again gets numb while Saltanat wants her answers.

Upcoming Sufiana Pyaar Mera episode update: Zaroon and Saltanat will come closer and later Zaroon will put a knife in her stomach.

© Copyright tellybest.com, 2018 & 2019. All Rights Reserved. Unauthorized use and/or duplication of this material without written permission from tellybest.com is strictly prohibited.
Cached Saved on: Friday 31st of January 2020 04:05:43 PMCached Disp on: Saturday 22nd of February 2020 09:39:08 AM