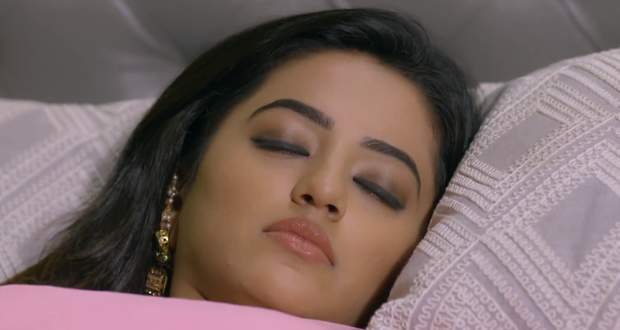 Kaynaat gets happy to think about how she smartly took the blood sample of Saltanat and used it to save herself. She had also burned her fingers.

Meanwhile, Neha blames Madhav about living in the past and bringing the girl (Saltanat) in their home. Madhav says he will cure her and then will take his revenge.

Later, Mamoon decides to leave and bids goodbye to everyone. At the same time, Madhav’s family is worried they will get in grave trouble if media comes to know about Saltanat.

Mamoon misses his wife and confronts Zaroon about getting punished for being greedy. He further wants him to come along with him.

Zaroon says he will make things right and has nothing to lose now. Meanwhile, Madhav’s sister plans to kill Saltanat to save her marriage.

Kaynaat tries to console Zaroon but he feels the girl sitting in front of her is the killer of his mother. Zaroon says he can’t see her face and tells her to leave.

Madhav starts the Pooja of Janmashtmi while his sister comes to kill Saltanat.

Upcoming Sufiana Pyaar Mera episode update: Saltanat is in a cold state while someone comes to save her from dying.

© Copyright tellybest.com, 2018 & 2019. All Rights Reserved. Unauthorized use and/or duplication of this material without written permission from tellybest.com is strictly prohibited.
Cached Saved on: Tuesday 7th of July 2020 04:56:01 PM