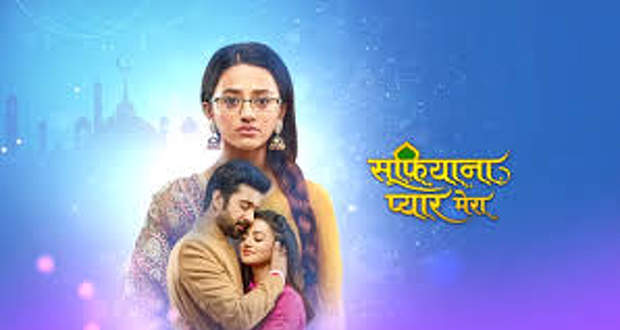 Today's Sufiyana Pyaar Mera 6 Jul episode starts with Preeti is showing the room to Zaroon and Saltanat and ask them to use stuff that is in the cupboard.

Zaroon says to Saltanat that she might have not dreamt of staying like this but Saltanat says she is happy with him and they start cleaning that place.

Ghazala and Rubina ask Sabina to leave the house and trouble her by asking her to do sit-ups. Meanwhile, Zaroon and Saltanat share a romantic moment.

Zainab scolds Sabina and also ask her to leave because she blamed an innocent girl. Sabina begs her that she has not shared anything with anyone.

Zainab goes to Kainat and slaps her. Zainab says that she has appeared the pregnancy rumor. She says many mean things to Zainab and also threatens her that if she tries to do anything wrong with Zaroon and Sultanat, then she will hand over her to police.

Later on, Kainat lies on the floor and says by hook or crook she will get Zaroon.

Saltanat says to Zaroon that she trusts him that why she left her house and now staying with him.

Both are going to sleep but the light goes off, so Zaroon lights a candle whereas Kainat hurt herself with a burning candle.

Next morning, Kainat gives tea to Mamoon and make a deal with him.

Upcoming Sufiana Pyaar Mera episode update: Mamoon visits Zaroon and Saltanat and asks Zaroon to pack his bags and come with him. He also says he does not have any relation with Saltanat.

© Copyright tellybest.com, 2018 & 2019. All Rights Reserved. Unauthorized use and/or duplication of this material without written permission from tellybest.com is strictly prohibited.
Cached Saved on: Sunday 2nd of February 2020 03:13:21 PMCached Disp on: Wednesday 19th of February 2020 12:03:47 AM