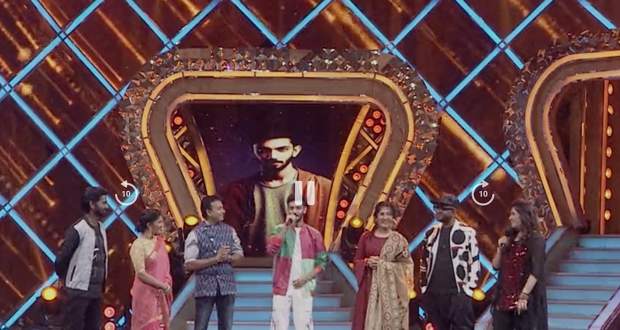 Sivaangi started the Super Singer 7 today’s performances with ‘Usukku’ song. Anirudh was happy with her version.

Next, on Super Singer 7 stage was Vaisakhan who performed on the song ‘Nee Paartha vizhigal’.

Super Singer 7 contestant Parthibhan continued with the song ‘Sodakku Mela’ and made Anirudh happy with his performance.

Next up on Super Singer competition was Suganthi who sang ‘Darlingu’ song. Everyone from audience and Super Singer judges danced along with the song and made Binny sing the song on stage.

Murugan sang ‘Kattikida Munne’ song which was appreciated by judges.

Next up was Mufeeda who sang ‘Mounamana’ song which gave 37 points.

Upcoming Super Singer 7 episode update: Remaining contestants to do the performances in the upcoming episode.

© Copyright tellybest.com, 2022, 2023. All Rights Reserved. Unauthorized use and/or duplication of any material from tellybest.com without written permission is strictly prohibited.
Cached Saved on: Wednesday 25th of January 2023 10:18:05 PMCached Disp on: Monday 6th of February 2023 02:13:18 AM