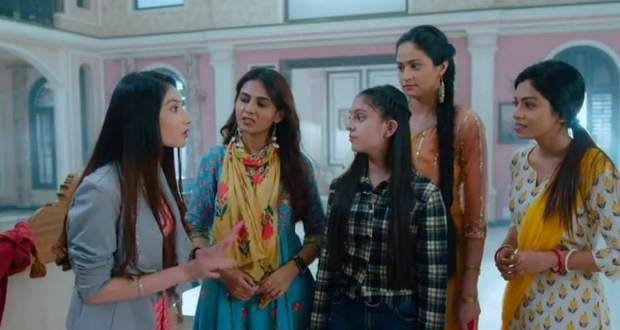 Today's Swaran Ghar 10th May 2022 episode starts with Swaran distributing drinks to Ginni’s teacher and others and asks for Ajit who is distributing pamphlets in the heat.

Meanwhile, Divya is stubborn and only wants to know about Ajit, she even confers with Dillu. Ultimately Jai tells her about Swaran which angers Divya.

After a while, Swaran comes looking for Ajit and offers him a drink.

Nimmo and Kiran spot Ajit and Swaran together and play a trick on them.

Swaran is about to fall on a wet floor when Ajit brakes her fall.

Swaran gets up and puts her dupatta back.

Her dupatta somehow get tangled in a pedestal fan and she was getting choked by it.

Ajit comes to her rescue and asks to switch off the fan but the plug gets stuck and Swaran suffocates.

By now Swaran has lost consciousness.

Ajit and all the girls get worried about this and try to wake Swaran. Sometime later Swaran wakes up and is in shock.

Ajit offers her Divya’s dupatta and the girls take her to the stall.

Meanwhile, Jai and Divya arrive at Swaran Ghar and come across Vikram.

After a while, Ajit is drinking Nimmo's spiked drink while talking to Amber.

Ajit tells Amber about Divya’s possessive attitude and smiles lovingly thinking of him.

Just then Prize distribution is announced.

On the other hand, Vikram insults Ajit in front of Divya and Jai and tells them that Ajit and Swaran are posing as Mr & Mrs Bedi in Ginni’s school.

Divya insists that Jai take them to school.

In the meantime, Swaran’s team wins the competition and is called on stage.

Swaran thanks her husband for giving the inspiration and recipe for the cream.

Swaran also calls Ajit on stage to thank him.