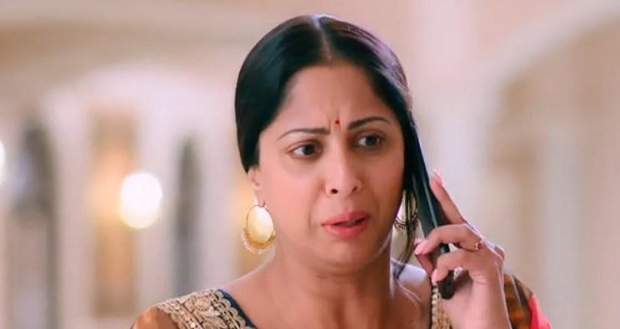 Today's Swaran Ghar 11th April 2022 episode starts with Ajit standing in rain shivering while Swaran looks at him from behind the pillar.

On the other hand, Ankita shows Jai, Swaran’s letters from the past and tells him that Swaran and Ajit go way back.

As Nimmo is passing by Swaran Ghar, she sees Ajit returning Swaran’s umbrella while Swaran asks him to go home.

Swaran goes to get the press for Ajit so he can dry his clothes.

After a while, Nimmo sees Ajit going inside Swaran Ghar and goes to spy on him.

Meanwhile, Dillu calls Ajit's phone which is being charged, and Swaran picks it up which disappoints Jai.

Later, Swaran sends Ajit's phone to him through Neelu.

Nimmo takes Ajit’s picture in a half-dressed state feeling pleased that this will add fuel to the Swaran story but drops her phone and breaks it.

The next morning, Nimmo tries to restart her phone but it stays off.

Meanwhile, Kiran tells Nakul that Ajit has been ironing his clothes in Swaran Ghar.

Nimmo says she has witnessed the whole thing with her own eyes.

Swaran is talking on the phone when Nakul, Vikram and Yug come barging in asking Swaran About Ajit.

Swaran is disgusted to hear her son's accusations and tells them that they have no right to question her.

As usually, Vikram misbehaves with Swaran and goes inside to find Ajit.

Instead of Ajit, they find Tanu in the room who threatens them with beating making them go away.

Swaran is also surprised to see Tanu in the house.

Just then, she gets a call from Micky who is telling her about Ginni’s problem but meets with an accident.

Swaran goes to get Micky from the hospital where they find Micky’s dad.

Micky tries to apologise to her but he refuses to acknowledge her and goes away.

Meanwhile, Swaran tells Micky that she has turned her home into a working women's hostel and she can come to live there.