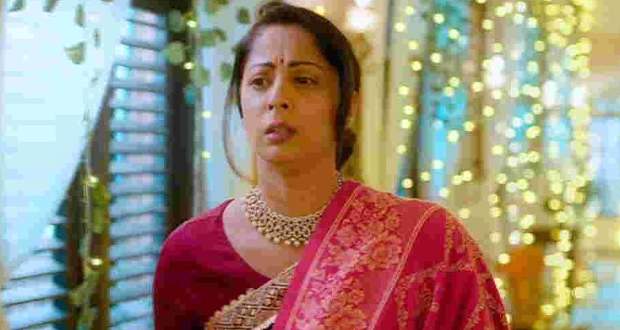 Today's Swaran Ghar 11th March 2022 episode starts with Swaran crying at the Gurudwara while she pleads for help.

Later, Nimmo complements Swaran's beautiful necklace. This gives Swaran a solution and she decides to sell it for Kanwaljeet's treatment.

Meanwhile, Vikram is tense as he committed fraud in his company. He thinks about selling Swaran Ghar as soon as possible to hide his crime.

On the other hand, Kanwaljeet wears his Superman cape to talk to his sons Nakul, Varun, and Yug. His sons are scared to pick up his call and start to blabber about money.

Kanwaljeet says he has not called to scold them or ask them for money, instead, he just wants them to stand with their mother  Swaran as she is all alone.

After hearing the harsh words from his sons, Kanwaljeet gets emotional and says he is not a thief and cuts the call.

Meanwhile, Ajit overhears Kanwaljeet's conversation and watches him cry because of his ruthless sons.

Later, Swaran gives her necklace to the jeweler on a collateral loan. She feels guilty for doing this as it was her mother-in-law's gift to her.

Meanwhile, at Swaran Ghar Kanwaljeet asks Ajit to take care of Swaran after his death as he can still see Ajit's love for Swaran in his eyes.

On hearing this, Ajit immediately declines his request and leaves. After some time Kanwaljeet's words echo in his ears and he decides to come back.

Swaran arrives back from the jeweler where Kanwaljeet asks for a promise from her. She says she will agree to whatever he says.

Meanwhile, Swaran looks back and finds Ajit standing at the door.