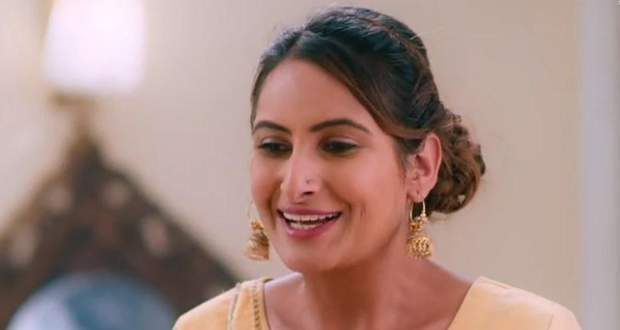 Today's Swaran Ghar 12th April 2022 episode starts with Swaran telling Micky that she is turning her house into a working women's hostel and she can come live with her along with Ginni.

Micky is worried about Ginni but Swaran assures her that she will treat her like her family.

On the other hand, Jai is asking Ajit about being at Swaran's place the previous night.

Ajit tells him that he has gone to save Swaran.

Not believing Ajit’s motives, Jai shows him Swaran’s letters and asks for an explanation.

Ajit gets angry at seeing his letters and feels hurt at being wrongly accused of having an affair with Swaran.

Later, Ajit reads the letters to Jai and shames him for thinking so little of him.

At Nimmo’s house, Vikram tells Nimmo that they did not find Ajit in Swaran's house and accuses her of behaving badly for the sake of spying.

Meanwhile, Jessica calls Swaran and pays her respect for Kanwaljeet and apologises for Vikram’s behaviour.

After the call, Mishika and Ginni arrive to live there as tenants giving Swaran hope for a bright future.

On the other hand, Nimmo is playing cards with her friends and is discussing Micky and Ginni's move to Swaran Ghar.

In the meantime, Swaran is fixing the working women hostel board at the gate and Ajit helps in fixing it.

Ajit asks Swaran to let him help with the money while Swaran tells him that she will manage.

Just then all three brothers come to take away the board while Swaran and Ajit stop them.

Nakul accuses Swaran of being greedy and becoming worldly-wise.

Swaran pays no heed to their taunts and tells them that she will definitely succeed and informs her about already having a tenant.

Vikram put forward the challenge for Swaran to arrange three tenants in two days and if she manages to do that then they will leave her alone.

Swaran accepts their challenge and tells them that if she fails then she herself will open the doors of Swaran Ghar for them.