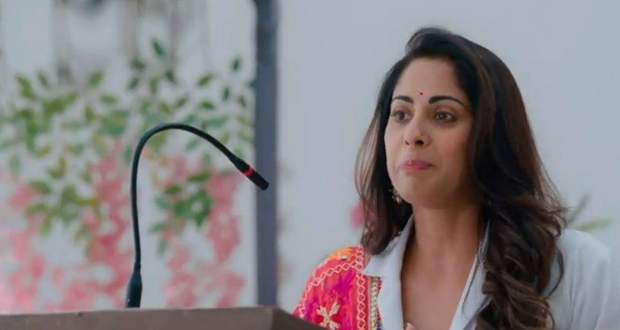 Today's Swaran Ghar 12th May 2022 episode starts with Ajit coming out of the bathroom and remembering everything that has happened yesterday.

Ajit tells himself that there is not much to think about this as nothing can be done now.

Ajit sends them out and just then Swaran comes in.

Ajit gets scared thinking she will scold her again and tells her to go but Swaran tells him that it is her house and therefore he should go.

Swaran berates Ajit for creating a spectacle at the school.

Ajit berates Swaran for putting her dupatta in a fan and what if something happens to her.

Swaran wants him to deny his feelings for her but Ajit tells her that he considers her his Swaran and she will remain that forever.

Ajit realises what he has said and apologises to Swaran but thankfully it was just a  dream.

On the other hand, Swaran confidently tells Micky that Ajit knows the boundaries of friendship and he will never cross them.

Micky tells Swaran that in today's debacle Ajit is innocent.

Swaran tells Micky that she is worried about Ajit who might lose his family while caring for her.

The next morning, Sharwari and Swaran are discussing Ajit when Yug comes in.

Swaran asks Yug if he needs anything.

In the meantime, Yug congratulates her on her success and brings her favourite pastries.

Yug also tells her about Kiran and Nimmo’s exploits at the school.

Meanwhile, Ajit hides after hearing Swaran’s voice while Swaran spots an open fridge and asks Amber to close it but Amber tries to distract her.

Later, Swaran catches Ajit in the kitchen and asks him to explain himself.

Swaran very strictly tells Ajit that his behaviour yesterday has given fodder to gossip.

Trying to make Ajit understand the gravity of the situation, Swaran folds her hand in front of him and asks him to go back home.