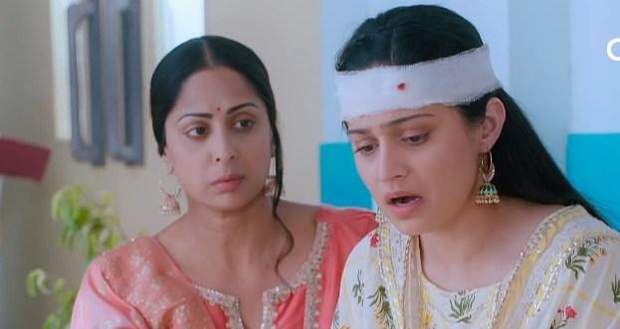 Today's Swaran Ghar 13th April 2022 episode starts with Swaran standing firm by her decision. She tells Sharwari and Ajit that she will not let anyone become her weakness.

Sharwari appreciates her and asks Swaran to make a reel for publicity.

Seeing Swaran struggle with dialogues, Ajit tells her to speak in her own style so that it would not look fake.

Meanwhile, Jai tells Ankita that his father and he are friends and he has never lied to him without any good reason nor will he let anyone come between him and his family.

After a while, Ajit is on phone, reading comments on the reel to Swaran and Sharwari and gets sad as they were pretty disappointing.

At the parlour, Preeto and Mrs Chaddha come to create problems for Micky by falsely accusing her and complaining to the owner about her.

Swaran is feeling responsible for Micky and thinks of doing something for her.

On the other hand, Vikram is sharing his anger about Ajit Lamba and Swaran. His friends tell him that they should kidnap him and teach him a lesson.

At the coaching centre, Micky warns Ginni to not be naughty while Ginni talks back to Micky embarrassing her.

Later, Micky tries to avoid Swaran's question but Swaran tells her that we should not give power to others to treat us as weak.

She quotes her example of Veneration day and tells her to take a stand for herself.

After a while, Swaran comes to the parlour and asks to be served by Micky.

Swaran praises Micky's work to Suman and gives her a tip as well.

Later, Swaran threatens Preeto with the same treatment for her daughter who is a salesgirl in a showroom.

Elsewhere, some goons stop Jai on the way and tell him to explain to Ajit to stay away from Swaran.

Meanwhile, Vikram ensures that his people are taking care of Ajit’s problem.

Vikram becomes overconfident and tells Nakul that now Swaran is alone and no one will help her when he will take down the board.

In the meantime, the goons try to throw black paint on Jai but Ajit comes in between.