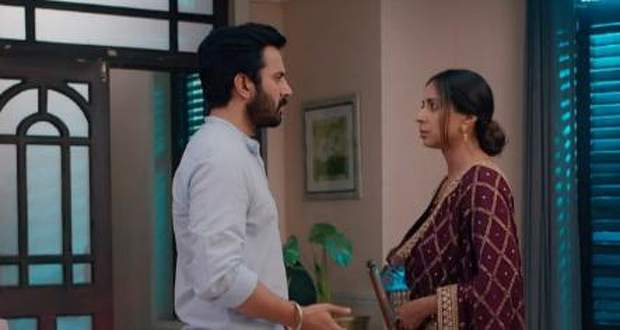 Just then Ajit gets a call from Jai.

Jai tells Ajit that Divya has arrived and asks him to come soon.

Swaran packs Divya’s favourite sweet and her dupatta to Ajit.

Ajit Arrives at his house to find Divya has been locked since yesterday.

Ajit opens Divya’s room to find it bungled but empty.

Ankita points towards the open terrace door and searches for her up and down.

Ajit prays to find Divya to be found and just then Divya seeks Ajit's promise before coming out of her hiding place.

At the supermarket, Swaran and Amber are shopping for vegetables when they come across Kiran.

Swaran taunts Kiran for spiking Ajit’s drink and shames her for doing such a vile act.

Meanwhile, Ajit is trying to appease Divya by assuring her of her love for her. Divya puts forward a condition for Ajit that he will not meet with Swaran or go to Swaran Ghar anymore.

Nehmat calls Ajit and tells her about Vikram planning something evil for Swaran which worries Ajit.

In the meantime, some clients from the exhibition come with a big order for Swaran’s cream while which makes Swaran excited.

Swaran gets puzzled at the mention of the deal and tells them that she does not understand these legal formalities while Amber reminds her of Nehmat.

Nehmat comes asking for Ajit and Neelu offers to call him but Swaran stops her saying that Ajit is meeting his family after a long time.

On the other hand, Nakul is comparing Kiran and Swaran’s love for him and finds Kiran lacking.

Nakul gets so drunk that he was thrown out of the bar where Micky finds him.

Ajit is conflicted with Divya’s condition and weighing her options when Nehmat calls him and amber tells him about the contract when Swaran comes in and tells them that she will not call Ajit back now.

Ajit is in dilemma about the four promises that he has made and wants to keep.

© Copyright tellybest.com, 2022, 2023. All Rights Reserved. Unauthorized use and/or duplication of any material from tellybest.com without written permission is strictly prohibited.
Cached Saved on: Tuesday 31st of January 2023 03:49:55 AMCached Disp on: Monday 6th of February 2023 05:56:54 PM