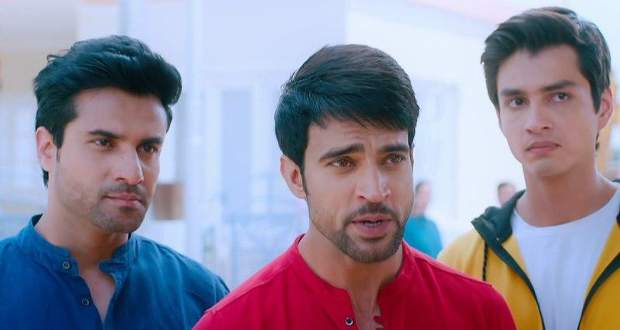 Today's Swaran Ghar 15th April 2022 episode starts with Ajit telling Vikram that he has promised Kanwaljeet that he will look after Swaran.

Scolding Vikram for being careless, Nakul warns him to talk to them before doing anything illegal in future or else they will get stuck in India forever.

Ajit comes to tell Swaran of Vikram’s doing but changes his mind after seeing Swaran so happy.

Talking to Yug, Nakul tells him about Vikram's latest act and asks him to keep Vikram away from Nemat's matter.

At the court, Yug comes to Nemat asking for help while looking haggard. Yug creates doubt about Nemat in her client's mind forcing Nemat to take Yug’s case.

In Nemat's office, Yug tells Nemat that he knows that she is not a real lawyer while Nemat tries to avoid Yug's allegations.

However, Yug tells her that his sources have already revealed so much to him and can find out more.

Afterwards, Yug asks Nemat to call Swaran and tell her that she can no longer rent a room from her.

Elsewhere, Kiran is discussing Swaran with Nakul and also implies that Swaran and Ajit share a special bond now.

Meanwhile, Nemat calls Swaran telling her that she has got a place in her PG and she will continue to live there.

Swaran tries to convince Nemat but being blackmailed by Yug, she refuses Swaran.

Nemat later, tells Yug to get out while Yug warns Nemat to stay away from his family or her secret will be out.

After a while, Nakul is confident that once Swaran loses, she will have no choice but to give in.

Later, Swaran sends a voice message to Nemat telling her to do as she like and her doors are always open for her.

Soon, Sharwari calls Swaran to meet her at the Savitri hostel as there are some girls needing immediate accommodation.

Meanwhile, Ankita tells the reporters that Ajit has left home and is living at his Dhaba which Swaran overhears.