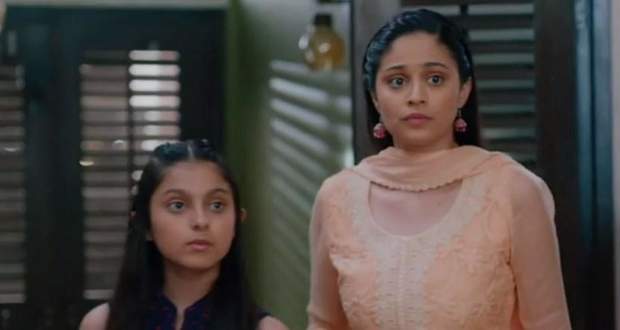 Today's Swaran Ghar 16th May 2022 episode starts with Nakul crying on the road in an intoxicated state while Micky comes to his rescue.

Micky asks Nakul what has gone wrong with him.

Nakul gets nostalgic about Swaran’s love but Micky assures him that Swaran still loves them all.

Nakul tells Micky about losing his job and Micky escorts him home in an auto.

Before he can follow them, Diviya calls him and he decides to go home instead.

At the house, Divya reminds Ajit to not go to Swaran ghar and leaves.

The next morning, Swaran's house is in hustle and bustle as people are getting to work while Swaran asks for Micky.

On the other hand, Nakul wakes up and remembers telling Micky about his job loss.

At Swaran Ghar, Neelu, Nehmat and Amber are waiting for Ajit to arrive while Swaran goes to get her bag.

Just then Ajit comes with a car while Swaran spots Ajit and becomes surprisingly shocked.

All the girls tricked Swaran into going alone with Ajit.

Ajit tells them to make haste and if she wants to reach the market on time.

In the car, Ajit and Swaran are arguing with each other and Swaran accuses Ajit of hiding something.

Just then Divya calls Ajit and Ajit remembers Divya’s words about Swaran and disconnects the call.

Incidentally, Divya and Param also come to the same market as Ajit and Swaran.

Ajit calls Divya back and lies to her about being at the Dhaba.

Both Ajit and Divya are doing their shopping when Divya spots him with Swaran and feels betrayed at Ajit's lies.

Divya feels hatred toward Swaran for becoming her competition.

On their journey back home, Ajit’s car gets heated and stops.

Ajit tells Swaran to have lunch while the car cools down.

Swaran once again tells Ajit to go home as she should go.

Ajit tells her that Divya has gone home.

Divya comes back and asks for Ajit but Ankita tells her that Ajit must be at the Dhaba.

Meanwhile, Swaran is amazed to hear that Divya has no problem with Ajit living at Swaran Ghar.

© Copyright tellybest.com, 2022, 2023. All Rights Reserved. Unauthorized use and/or duplication of any material from tellybest.com without written permission is strictly prohibited.
Cached Saved on: Tuesday 31st of January 2023 03:49:49 AMCached Disp on: Thursday 9th of February 2023 05:38:11 AM