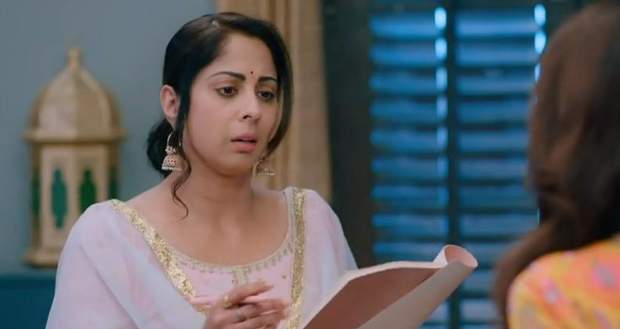 Today's Swaran Ghar 17th May 2022 episode starts with Swaran asking Ajit about Divya’s opinion on his living in Swaran Ghar but Ajit lies to her.

Swaran praises Ajit's upbringing while Ajit feels guilty for lying and tries to distract Swaran from the topic.

Meanwhile, Dillu comes to Divya who uses him to ask questions about Ajit.

At the Dhaba, Swaran insists on paying for lunch as she is earning now while Ajit encourages her for her business.

Swaran shares with Ajit that she has allowed her children to cross their lines when she became their friend and now she is suffering the consequences.

Ajit feels the same for Divya but remains quiet.

On the other hand, Amber has arrived at the restaurant to meet Aashu while Vikram also comes there with the studio photographer and seeks assurance from him to speak the truth in court.

After a while, Swaran and Ajit come back to the car but it is still broken.

Meanwhile, Yug also arrives at the same restaurant where Vikram is and spots Vikram talking to someone about the case and gets worried.

At Swaran Ghar, Amber returns home with a broken heart and the girls try to comfort her.

After struggling with the car for a long time, Ajit gives up and tries to get a lift.

At Swaran Ghar, Divya comes to their house and creates a scene and insults the girls.

Just then Amber gets a call from Kiran asking for information while Amber tells her that she will get no more information from now on as Aashu has ditched her today.

However, Divya’s shout reaches Kiran through her phone.

On the other hand, Ajit stops a sugarcane tractor to ask for a lift while Swaran refuses to sit on it remembering old times.

Later Ajit convinces her to ride on it.

Meanwhile, Divya is behaving rudely with the girls and asks for directions to Ajit’s room.

Divya tries to take away Ajit’s things from Swaran Ghar but Neelu and the other girls stop her saying that she has to wait for Ajit to come back before she takes anything from here.

They also threaten her with Nehmat's legal degrees which offend Divya and she calls the police herself.

© Copyright tellybest.com, 2022, 2023. All Rights Reserved. Unauthorized use and/or duplication of any material from tellybest.com without written permission is strictly prohibited.
Cached Saved on: Friday 27th of January 2023 04:29:05 AMCached Disp on: Monday 6th of February 2023 07:30:52 PM