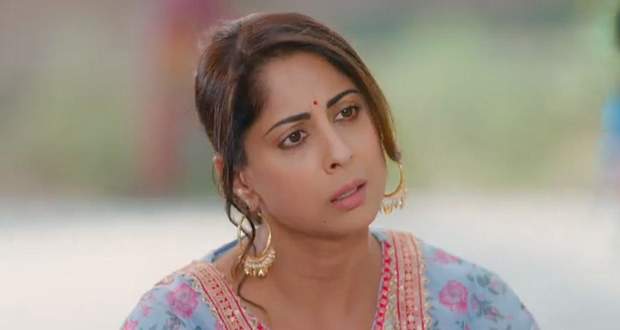 Today's Swaran Ghar 18th May 2022 episode starts with Swaran sleeping on the truck while Ajit is driving.

After a long journey, Swaran sleeps again while Ajit sits watching her while reminiscing old times.

Meanwhile, Nimmo is excited to hear Divya’s arrival at the house and tells Kiran to send Nakul to Swaran's house.

On the other hand, Divya accuses them of trapping Ajit here with their sorry stories whereas all the girl defends themselves.

After a while, Divya tries to snatch Ajit’s bag from Neelu when it lands on her foot hurting her.

In the meantime, Ajit splashes water on Swaran to wake her up and mocks her anger while Swaran twists her leg while climbing down the truck.

As they were proceeding toward the house, Ajit spots a poor boy with roses and buys them to help him and asks Swaran to hold them for him.

Divya insults Swaran in front of the girls when Nakul comes in and rebukes Divya.

Nakul in turn insults Ajit and accuses him of brainwashing Swaran against him and his brothers.

Nakul and Divya are fighting when Ajit and Swaran come in holding hands.

Ajit is shocked to see Divya while Divya and Nakul stare at them with disgust.

Ajit tries to take Divya away from there while Divya begins misbehaving badly about Swaran.

Swaran tries to calm Divya and tells her to talk to her about whatever questions she has.

Divya wants to know why Swaran was shopping with Ajit and why was he holding Swaran’s hand and why is she holding flowers in her hands.

Despite Swaran's answer, Divya continues to distrust them.

Swaran tells her that she will not further explain their relationship to her because she does not want to believe the truth.

Swaran tells Divya that she has brought a gift for her as she couldn't attend her wedding.

However, Divya’s manners are out of her control which makes Ajit rebuke her.

Divya throws Swaran’s gift on the floor accusing Swaran of brainwashing Ajit which angers Ajit and he scolds her badly.

© Copyright tellybest.com, 2022, 2023. All Rights Reserved. Unauthorized use and/or duplication of any material from tellybest.com without written permission is strictly prohibited.
Cached Saved on: Thursday 26th of January 2023 09:13:38 AMCached Disp on: Thursday 9th of February 2023 04:16:29 AM