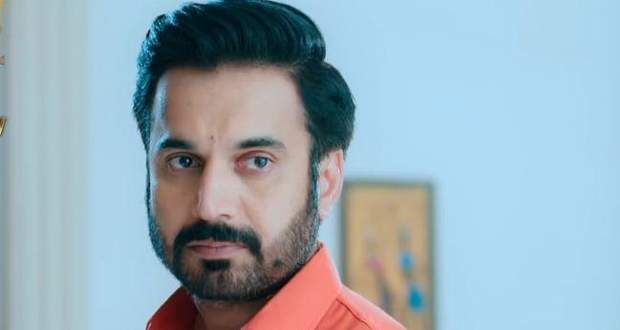 Feeling happy to have Nehmat, Sharwari asks Nehmat about being with Yug.

Vikram is angry at Nehmat for double-crossing them and vents his anger on Yug.

Kiran wants to tell her secret to Swaran but Yug stops her saying that she has executed some plan.

After a while, Nimmo tells Kiran not to trust these brothers and takes matters into her hand.

Meanwhile, Yug is wondering about Nehmat and what has made her pay him two lacs just to be a tenant at Swaran Ghar.

Going upstairs, Nehmat collides with Ginni and her suitcase falls down the stairs and opens.

Swaran comes to gather her things while Nehmat is scared of Swaran looking at the photo frame.

However, Nehmat has a narrow scape when Swaran returns the frame without any curiosity.

On the other hand, Ajit is talking with Jai and tells him that he is fit and fine.

Later, Ajit gets a message from Swaran informing him about Nehmat’s return.

The next morning, Nimmo sabotages Swaran’s third tenant on the way, telling her that Swaran Ghar is haunted.

With only ten minutes to spare, Swaran's sons gather around the Swaran Ghar while she herself is wondering about her third tenant.

Seeing Swaran still waiting, Vikram asks her to give up.

Vikram threatens to break the board first whereas Nakul tells him that first, they will have ‘Aarti’.

With only thirty seconds to spare, Nimmos advises Swaran to welcome her sons to her house.

Swaran's hopes dwindle as they begin the countdown.

Just then, Ajit comes on his scooter with a girl sitting behind her, who is Swaran's third tenant named Amber.

Ajit gives Swaran ‘Aarti Thaali’ and asks her to welcome her daughters in Swaran Ghar.

© Copyright tellybest.com, 2020, 2021. All Rights Reserved. Unauthorized use and/or duplication of any material from tellybest.com without written permission is strictly prohibited.
Cached Saved on: Monday 3rd of October 2022 05:40:14 AMCached Disp on: Friday 7th of October 2022 03:26:52 PM