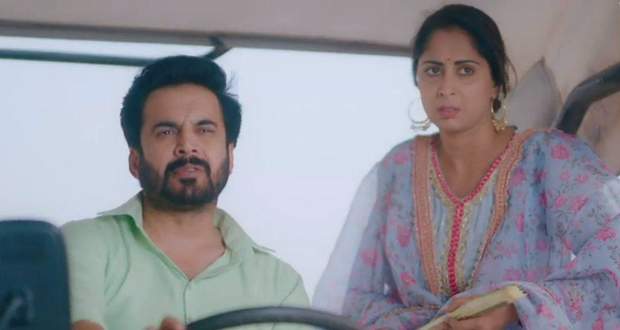 Today's Swaran Ghar 19th May 2022 episode starts with Divya telling Swaran that she will never take her place in Ajit's life and throws her gift away.

Ajit gets angry at Divya for misbehaving with Swaran and feels ashamed of Divya’s behaviour.

Ajit tells Divya that she has put a question mark on his upbringing by throwing away a gift of love and blessings.

On being asked by Ajit to leave, Divya looks with hatred at Swaran and tells her that she has succeeded in separating Ajit from her.

Meanwhile, Nakul overhears Kiran and Nimmo making fun of Swaran being insulted at Divya’s hand and shaming them.

On the other hand, Swaran is remembering Divya’s hurtful words and drops the jar of chickpeas spreading on the floor.

Later, Ajit comes to Swaran who asks him to go home.

However, Ajit tells him that he wants to help her build her business and after that, he will go back home.

Meanwhile, Micky comes to Swaran and tells Swaran that Nakul really cares for her.

Overhearing Micky, Ajit suspects that Nakul is planning something against Swaran.

The next morning cast of "Saukan Saukne" comes to Swaran Ghar to buy Swaran's cream.

However, both the women begin to fight each other.

Just then their husband comes in and asks them to stay quiet.

Ajit asks them to teach Swaran some Kalesh techniques.

Ajit tells their whole story while both women tell them to watch how to do Kalesh.

After a while, both the girls begin to fight in front of Nimmo.

Nimmo and Kiran sort the matter and become their target.

Basing their stories both women beat Nimmo and Kiran and include Vikram in the beating and harasses them in front of everyone.

Vikram tries to fight back when their husband comes there and beats Vikram for raising his voice to his wife.

Afterwards, the team thanks Swaran for the cream and tell her that sometimes it is necessary to use other methods to teach people lessons.

Vikram overhears everything and speaks his mind warning Swaran that she will get an apt birthday gift on her birthday tomorrow.

© Copyright tellybest.com, 2022, 2023. All Rights Reserved. Unauthorized use and/or duplication of any material from tellybest.com without written permission is strictly prohibited.
Cached Saved on: Thursday 26th of January 2023 12:39:18 AMCached Disp on: Thursday 9th of February 2023 04:33:11 AM