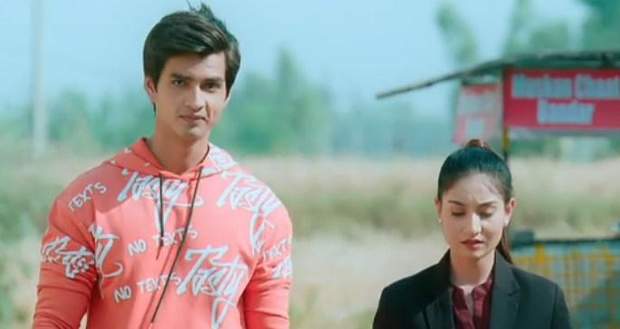 Today's Swaran Ghar 20th April 2022 episode starts with Swaran taking the hammer from Vikram’s hand and tightening a loose nail on the board saying neither thunder nor storm can remove this board from its place.

Later, Swaran shares her thoughts with Ajit about losing hope for a minute and just then Ajit came with a ray of hope.

In the meantime, Nakul is worried that the matter of Swaran Ghar is still not resolved while he has to leave in two days and they fight amongst each other while Kiran tells them to focus on the will.

Meanwhile, Swaran is serving breakfast and discussing rent with Amber.

On the other hand, all three brothers are planning to cut Swaran Ghar’s light so that they can search for the will.

Kiran calls her brother to ask for help and is surprised to know that he also knows a girl name, Amber.

Meanwhile, Nehmat and Ginni are fighting because Ginni has entered her room to play football and breaks the photo frame.

Later, Swaran tells Ajit that she has asked Micky to pay the bill, while Ajit tells her about putting a stall of his Dhaba in the 'Baisakhi' fair.

Swaran teaches Nehmat and Ginni a valuable lesson at the dinner table while all three brothers are waiting for the light to go off as planned.

Knowing that same Amber is after Aashu, Kiran approaches her with an offer which Amber refuses.

However, Kiran tells her that she is Aashu’s sister and if she follows her order then she will help her get Aashu.

Swaran prays to God to keep the evil eyes away from her house.

The next morning, people are celebrating ‘Baisakhi’ everywhere, while Swaran wishes Kanwaljeet happy ‘Baisakhi’ and remembers their old times.

Afterwards, Swaran is pleased to see her daughters dressed in yellow colours.

Amber convinces everyone to go to the ‘Baisakhi Mela’ to enjoy the occasion.

All three brothers praise Kiran for making it possible to search Swaran Ghar by arranging to send Swaran and her tenants to go out.