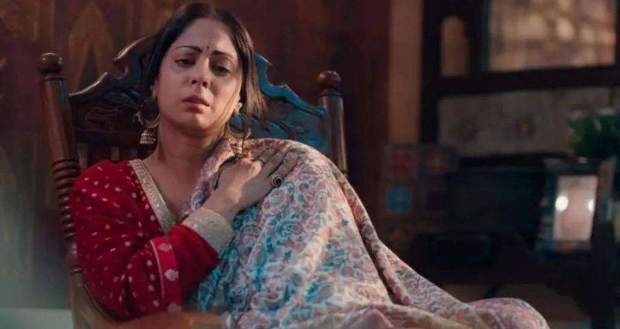 On the other hand, Yug suggests they should wait for a while as it has been only a few days since Kanwaljeet's death. Vikram and Nakul taunt Yug for losing all the money earlier.

Meanwhile, Swaran meets a girl named Ginni and her mother Nikki. Swaran suggests Ginni should tackle her children with patience.

Nikki taunts Swaran that she should focus on her sons' behavior instead to which Swaran replies that it is parents' duty to teach children good values and morals.

Meanwhile, at Swaran Ghar, the insurance manager arrives. Nakul, Vikram, and Yug look at the insurance amount with avarice and try to sign the papers themselves.

Later, Swaran arrives and instructs the manager to arrive after thirteen days as it is not considered good to receive money during mourning days.

Vikram and Nakul get furious, they start blaming their mother Swaran for everything and taunt her on how she will be able to handle all the paperwork.

Swaran says she handled everything during Kanwaljeet's recovery in the hospital and is capable of doing the same now. Swaran clearly states that she can manage the money on her own.

Meanwhile, at Nimmo's house Kiran, Nakul, Vikram, and Yug discuss the sudden change in Swaran's behavior. Nimmo hints on someone outside of the family is instigating Swaran. Vikram, Kiran, Nimmo, and Yug suspect Ajit might be related to this matter.

Later, Nakul denies this perspective raised by Nimmo and explains that their inability to send the money and injection is the reason for Swaran's unstable mind.

On hearing this, Vikram gets an idea of proving Swaran mentally sick and grasping the insurance money.