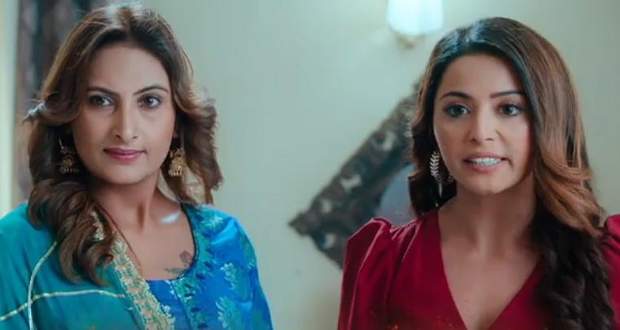 Just then Ginni comes to Micky and tells her that she has not gone to 'Maut ka Kuan'.

Seeing Amber alone, Micky tries to call Ginni but she was unavailable.

Micky worries for Ginni and calls Swaran telling her that Ginni is missing again.

Swaran tells Micky that as soon as they get down the swing they will help her search for Ginni.

Afterwards, Ajit climbs down the swing and restarts it to bring Swaran down while Yug feels irritated.

Micky tells Swaran that she has searched everywhere but hasn’t found her.

Swaran suggests going home and checking on Ginni while Ajit goes to make an announcement.

Meanwhile, Nakul and Vikram finally manage to uncover Kanwaljeet's hidden safe which has a lock on it.

Just then, Ginni comes with someone to show off Swaran Ghar.

Vikram and Nakul hide to avoid being seen.

As they are about to leave Swaran arrives at the door blocking their exit.

Light Out At Swaran Ghar

As soon as Swaran enters inside, the light went out giving Nakul a chance to hide.

Vikram has removed the fuse to cause a distraction and is hiding, waiting for the way out.

Nakul escapes through back door and scares Amber and Nehmat who are standing outside.

Ajit comes inside and follows the direction of the thief.

Unable to find anyone, Ajit repairs the fuse.

Vikram arrives at Nimmo’s house haggard and tells them that he has been spotted by Ginni’s celebrity friend.

Ajit tells everyone that someone has removed the fuse, cutting the power supply.

Ajit gets suspicious of Vikram but remains silent.

Later, Ajit asks his worker to send a key maker in the morning to change the locks of the house.

Ajit also calls another worker to bring his bag to Swaran Ghar and tells Swaran that he will be living here from now on which worries Swaran.