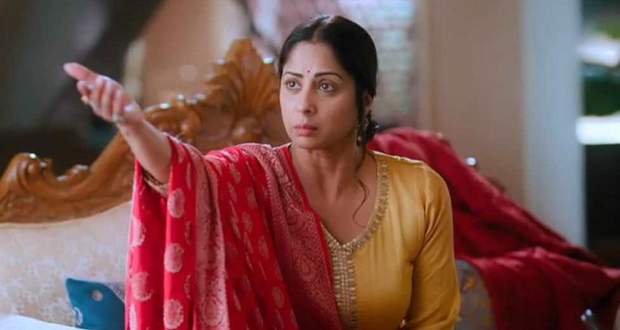 Today's Swaran Ghar 23rd March 2022 episode starts with Kanwaljeet's lawyer stating that Swaran is not allowed to change or modify, transfer or sell anything related to Swaran.

Only Ajit is given the right to change or modify anything in Kanwaljeet's will.

Meanwhile, Vikram and Nakul get furious on finding that everyone else's name is included in the will but not theirs.

Nakul and Vikram try to impose allegations on Ajit and try to find his fault.

Later, Vikram tries to blackmail Swaran emotionally by calling himself homeless. Yug says that his father has betrayed him.

Meanwhile, Ajit questions Kanwaljeet's lawyer about the reason behind including Ajit in his will.

The lawyer gives him a letter written to Ajit by Kanwaljeet where he requests Ajit to take care of Swaran in this selfish world.

On the other hand, Nakul, Vikram, and Yug continue with their quarrels and taunt Swaran on including Ajit in the family matter.

Later, Neelu decides to stop them while Vikram taunts her that she is also a family member as she got something from Kanwaljeet but not them.

Furious about not getting a single penny from his father's will Vikram breaks the piggy bank breaking his mother Swaran's heart.

Vikram starts to torture Swaran by calling her mentally unstable. Meanwhile, the insurance manager arrives and suggests Swaran should get a health checkup.

On hearing this, Swaran is left in an utter state of shock on realizing the height of covetousness shown by Vikram, Yug, and Nakul to obtain the insurance money.

Meanwhile, Neelu confirms to Swaran that she was aware of Kanwaljeet's will.

Suddenly, Nakul, Vikram, and Yug try to seek an apology from Swaran and beg her to forgive them for their actions.