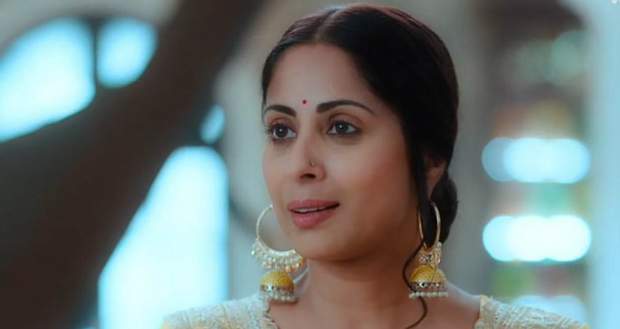 Swaran is shocked at Ajit’s declaration and tells Ajit that she does not need anyone to protect them.

Ajit tries to convince her that people react differently to a household that has a man in it.

Swaran gets furious at being told that she needs a man to carry on in her life. She blames the perception of the society that has built around the role of a man in a woman’s life.

She also tells him that she is not one of those women and asks him to go.

Later, Swaran comes to Micky and Ginni’s room and asks Ginni to apologise to her mother for leaving the 'Mela' without informing her.

Ginni misbehaves with Swaran but she handles her beautifully and blackmails her into apologising to Micky.

On the other hand, Nimmo tells everyone to call it a night but Nakul tells her that this needs to be done today as his tickets have been booked for the next day.

Just then, Vikram gets a call from his lawyer who asks him to prove a relationship between Ajit and Swaran and then they can get the Will in their favour.

After a while, Swaran is walking on the lawn and thinking of today's event just then he finds Vikram’s ring in the grass.

Just then, Ajit comes asking Swaran for a room key.

Swaran again asks Ajit to go but Ajit stubbornly refuses and goes to break the lock.

At Nimmo’s house, Yug is accusing his brothers of playing dirty to his own mother. He tells him that he does not want to be a party to their plan.

Vikram scolds Yug and Nakul and tells them that they cannot back out now.

Seeing Vikram, Swaran gives back Vikram’s ring to him and tells him that she has nothing to give to Vikram so she does not understand what he has been looking for in her house.

Vikram feels caught and in his frustration vows to find a connection between Swaran and Ajit.

Yug tells him that there is no such evidence.

Vikram tells Yug that he will create evidence to prove a relationship between Ajit and Swaran.

The next morning, Swaran fights with Ajit for staying in her house whereas Ajit turns the table on her and tells her that he will feel protected living here.

Nehmat and other girls also favour Ajit by letting him stay in Swaran Ghar as a Guardian.

Later, Swaran hands over tiffins to all the girls and tells Micky that she will also keep her appointment at Ginni's school.

Afterwards, Swaran comes to talk to Ajit and seeing his family’s picture thinks of talking to them.