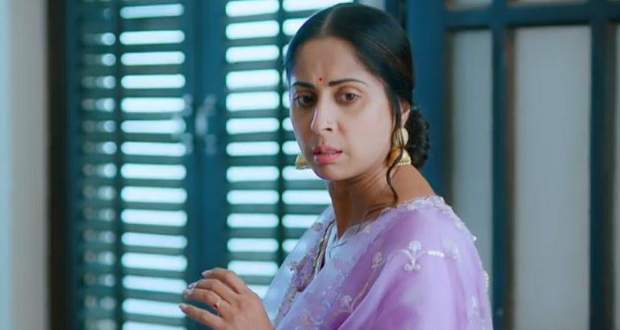 On being asked, Neelu tells Swaran about Nakul coming to meet her.

All the girls surround Ajit and tell him to stay hidden.

Swaran tells Nakul to come in and asks the girls to move away from Ajit.

Nakul is shocked to see Ajit and asks about him being in the house.

Nakul tells Swaran that Ajit living in the house is proof of what is happening here.

Nakul asks to talk to Swaran alone however, all the girls stand beside Swaran and tell him that whatever he has to say, he should say it in front of them.

Swaran asks Nakul to speak up about his purpose for coming here.

Nakul congratulates Swaran on having three daughters in place of sons.

Nakul accuses Swaran of forgetting her sons and replacing them with her tenants.

Swaran admits to changing in these two months and scolds Nakul for accusing her of replacing Kanwaljeet with Ajit.

Feeling jealous, Nakul leaves the house telling Swaran that it was his mistake to assume that she still loves him.

Micky comes to return Nakul’s phone and tries to convince them about Swaran’s love for them.

However, Nakul is furious to see Ajit in the house and is not ready to see reason.

After a while, Kiran tells Vikram and Nimmo that Ajit is living in Swaran Ghar.

Vikram gets angry and is about to go and kill Ajit when Nimmo and Kiran stop him.

Kiran tells him to stay focused on the plan and not take any hasty actions.

Vikram gets convinced and agrees to wait for the plan.

Meanwhile, Swaran is crying in her room thinking of Nakul’s harsh words.

In the meantime, Swaran’s tenants are in Ajit's room asking for ways to cheer up Swaran.

Ajit tells them that Swaran always cheers up after dancing and singing.

Nimmo and Kiran arrive at Swaran’s village to investigate Swaran’s past.

Meanwhile, Micky tricks Swaran out of her room and all the girls dance to cheer Swaran.