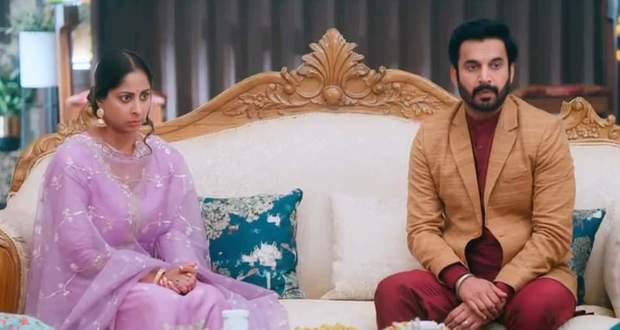 Today's Swaran Ghar 28th April 2022 episode starts with Swaran telling Neelu that she is going to gurudwara and Micky also asks to come along.

On the other hand, Nimmo stops the car and asks the postman whether he knows Swaran or not.

He tells her that she used to send letters to Ajit and Ajit to Swaran and praises Ajit.

Swaran and Micky are at Gurudwara, Swaran is happy to have the support of her daughters and shares it with Kanwaljeet.

Meanwhile, Kiran is hopeful that she can find the letters in Swaran Ghar and will use Amber for the job.

A woman comes to talk with Swaran and tells her that her makeup girl has backed out at the last minute and it's her daughter's wedding.

Swaran offers Micky’s services to her.

Kiran calls Amber and asks her to search the letters so that she can prove a relationship between Ajit and Swaran.

Amber feels uncomfortable doing this job but Kiran threatens her with Aashu's name.

Later, Swaran comes in and encourages Micky to do the job and not fear anything.

At the Dhaba, Ajit is reading a letter from Swaran about helping the postman and tells her that she always thinks of others.

In Swaran’s room, Amber feels bad for doing this to Swaran but her love for Aashu forces her to not listen to her conscience.

Later, Nakul asks Vikram what has been keeping him calm despite knowing Ajit is living in Swaran Ghar.

Vikram plays cool and tells them that he is learning to compose himself so that he does not do anything criminal.

Ajit calls the postman who tells him that two women have been asking for him.

Just then, Nimmo and Kiran come to Ajit’s Dhaba, where Nimmo wants to create trouble for Ajit.

However, Ajit recognises them to be those same women and tells the postman that he will take care of the matter.

In the meantime, Amber finds Swaran’s letters and a photo of Ajit and Swaran and misunderstands their relationship.

© Copyright tellybest.com, 2020, 2021. All Rights Reserved. Unauthorized use and/or duplication of any material from tellybest.com without written permission is strictly prohibited.
Cached Saved on: Monday 3rd of October 2022 05:38:39 AMCached Disp on: Friday 7th of October 2022 09:50:09 PM