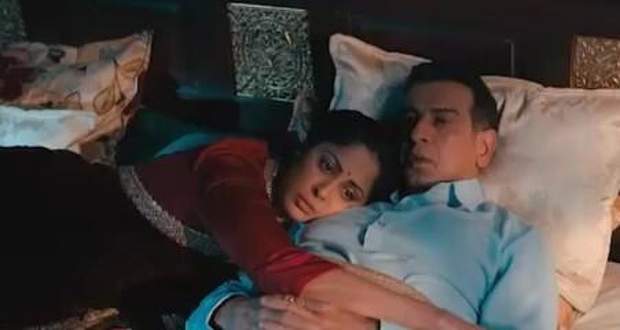 Today's Swaran Ghar 28th February 2022 episode starts with the beautiful morning at Swaran Ghar, where Swarna wakes up and expresses her gratitude as today is her son’s birthday.

Excited Swaran lovingly adds money in a small jar as she believes that mother’s love brings prosperity to the house.

This special day makes her walk on air with supreme joy and excitement. Swaran talks to her house help and says she should hurry as the preparations must be completed on time.

Later, she prepares the best food and decorates the house covering every minute detail.

Meanwhile, Kanwaljeet prepares the morning tea for his beloved wife.

Kanwaljeet reflects his love and affection for Swaran as he seems to cherish her with a rose.

On seeing Swarn in light-colored clothes he gets discontented and chooses a red-colored saree for her.

On choosing a bright-colored saree for Swaran, she says it's too loud for her age, while Kanwaljeet insists she wears it.

He replies that she should not care about others as he likes this color on her and they leave for Gurudwara to offer their prayers.

Meanwhile, their younger son Yug who is a struggling actor calls Swaran to ask for a sum of 5 lakhs. Swaran happily agrees to his request and says she will get it from her fixed deposit.

Later, Kanwaljit talks over the phone about insurance money, receiving a text message which says Swaran will receive the money after Kanwaljeet.

Swaran requests Kanwaljeet to give the fixed deposit money to Yug, but Kanwaljeet seems resilient and suggests keeping the money for her future instead.

After the couple comes from Gurudwara they call their elder son Nakul.

Nakul picks up the call but seems heedless and sleepy.

On being requested to see the preparations Swaran has done for her Nakul gets irritated.

Kanwaljeet felt disheartened too but tries to cheer his wife up. He reminds her about the birthday celebration with her friends.

Meanwhile, Nakul’s wife wakes Nakul up and they leave for celebrating his big day at a pub.

At Swaran Ghar, Kanwaljeet attempts to lighten Swaran's mood where they talk on a phone call over a distance.

Swaran leaves for the birthday celebration she arranged for Nakul with her friends.

Meanwhile, her friends talk about how Nakul was so affectionate towards her mother when he was young.

They start the celebration with a melodious song sung by Swaran longing for her beloved Nakul.