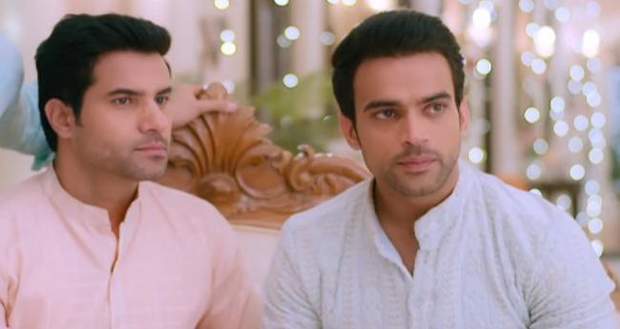 Today's Swaran Ghar 29th March 2022 episode starts with Swaran opening the door and asking her children to leave her house.

One by one everyone leaves the house. When they were at the gate Swaran stops them.

Nimmo is sure that Swaran, due to her soft-heartedness will take them back.

However, Swaran only wishes to return Vikram's wallet, to avoid being called a thief.

Vikram threatens Swaran with consequences but Swaran shut the door in their faces.

He tells her that all Kanwaljeet wanted was for Ajit to support Swaran.

Ajit also tells her that Kanwaljeet knew about his children and therefore has asked him to look after her.

Swaran is shattered to hear this revelation and runs inside to seek forgiveness from him.

In the meantime, all three brothers are blaming each other for being thrown out of the house.

Nakul plans to emotionally blackmail Swaran while Nimmo has a better plan for them.

On the other hand, Nimmo explains her plan while the three brothers are sceptical.

Yug tries to stop them from following the plan as it is going too far.

Meanwhile, Swaran is reminiscing her memories and cries with pain.

However, all she is planning to do is stop Vikram and Nakul from talking to her and spoil her plan.

On the other hand, Swaran is getting ready to go to collect the death certificate.

Just then Nimmo comes in trying to convince Swaran but Swaran asks to be excused, as she is in hurry.

Afterwards, Nimmo instigates Nakul, Vikram and Yug against Swaran and asks them to execute her plan.

After a while, Nakul, Vikram and Yug go to the police station to file a complaint against Swaran for fraud.