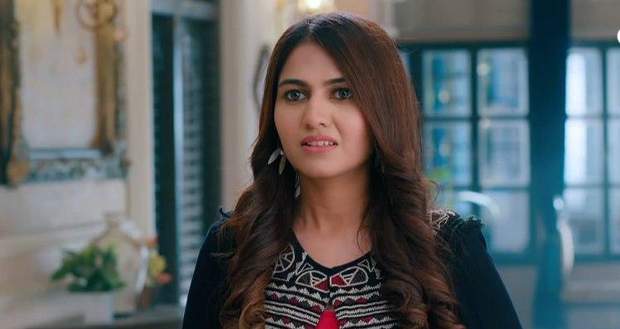 Today's Swaran Ghar 2nd May 2022 episode starts with Nimmo and Kiran reading the letters and feeling disappointed at their innocent writings.

Meanwhile, Ankita gets a call from Divya (Ajit’s daughter) asking about Ajit.

In the meantime, Sharwari favours Ajit living in the Swaran house.

Swaran gets upset at Sharwari’s favouring Ajit and tells her to go.

Swaran gives angry looks to Ajit and asks Neelu to get her a coffee.

On the other hand, Nimmo tells Kiran to create fake letters in Ajit’s handwriting.

Just then, Kiran gets a text from Amber, telling her about Micky and Swaran’s going to the wedding.

Nimmo and Kiran watch from the balcony as Ajit feeds 'Dahi–Shakker' to Micky and Swaran.

Afterwards, Kiran asks Nimmo to follow Swaran and spoil her wedding while she will create fake letters from Ajit.

Later, Swaran and Micky arrive at the wedding venue and convince the bride to let Micky do her makeup and not worry about people.

Ajit offers the bride's father free refreshments, in an attempt to be close to Swaran.

Later, Kiran is writing a fake letter, when Yug comes with Aarav to collect his ball.

Kiran gets worried to see Yug and chases them out of the room.

Meanwhile, Nimmo arrives at the wedding venue as the groom's aunt and asks to be taken to the bride.

After a while, Vikram comes in and finds Ajit's photo with Swaran and misunderstands it.

Kiran looks at the photo with shock and tells him that Swaran has been cheating Kanwaljeet with Ajit throughout.

Vikram decides to ask Swaran about it.