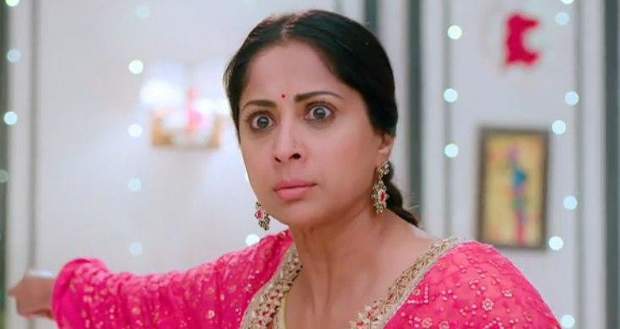 Meanwhile, Nakul tells the police that Kanwaljeet has changed his will only two days before his death and none of the sons is included in it. He suspects Ajit Lamba’s hand in the conspiracy.

Vikram also accuses Ajit of instigating Swaran in throwing them out.

Meanwhile, the corporate officer asks for a receipt that is given to the person who performed the last right.

At the police station, the police officer suggests, they sort out this family matter at home by trying to convince their mother, instead of involving the police.

As they are leaving, a reporter lurking by approaches the brothers offering them his help.

Vikram convinces, Nakul and Yug to take the help of the media to teach Swaran and Ajit a lesson.

After a while, the reporter, Roshan, approaches Ankita to gather her view on Ajit and Swaran’s relationship.

Ajit sees Roshan harassing Ankita and berates Roshan for the line of questioning.

Afterwards, Ajit calls Swaran to arrange a meeting, which Roshan overhears and calls his assistant to spy.

Meeting with Swaran, Ajit tells her about a reporter questioning Ankita.

Swaran apologises to Ajit for involving him in her mess.

Meanwhile, another reporter takes their photo.

The next morning, Swaran reaches Sharwari’s house to ask about a receipt.

In the meantime, Sharwari’s husband shows Swaran the newspaper headlines.

On the other hand, Dillu also shows Ajit the newspaper sending him in his shock.

Meanwhile, Swaran leaves the house but is attacked by reporters outside.

Inside the house, Swaran is disgusted at her son’s doing and is flabbergasted at the situation.

Talking to Kanwaljeet’s photo, she begins to cry and is shocked at the accusations.

Later, Sharwari brings water for Swaran, who is mad with grief at her son's allegations.