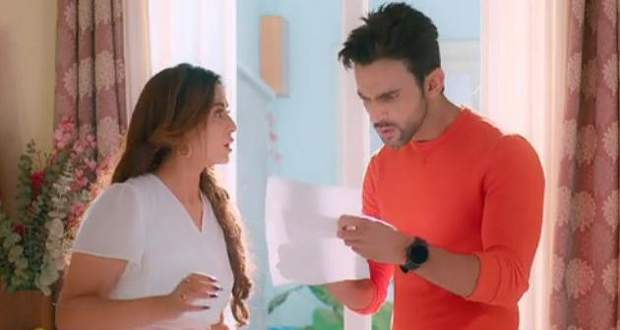 Just then Ajit spots Nimmo and understands what has caused the rashes.

Ajit, with the help of Amber and Nehmat, humiliates Nimmo in front of all the people.

However, Nimmo escapes from there before Swaran could spot her.

At home, Micky gives her first big check to Swaran and Swaran announces the party.

Later, all the girls plan to include Ajit in the party and send Swaran out to get some chocolate.

Afterward, Micky asks Ajit to cook something special for Swaran before she comes back.

On the other hand, Nimmo wants revenge and asks Kiran to call Amber.

At the same time, Swaran spots Amber going to Nimmo's house and gets distracted by Sarwari.

Amber receives a thrashing from Nimmo for asking questions at the wedding.

Spotting Amber coming out of the house, Swaran questions her but she lies to her which makes her curious.

Afterward, Kiran shows Ajit and Swaran’s photos to Nimmo and tells her that Vikram has gone to collect evidence from the studio which they will present in the court.

Meanwhile, Ajit prepares the food for Swaran and is about to leave when Swaran comes in and taunts Ajit for being in the house.

Before Ajit could leave, Micky stops him and tells Swaran that Ajit has prepared fantastic food for her.

However, seeing the condition of her kitchen Swaran gets angry which further increases her knowledge about their conspiracy.

Amber tries to favor Ajit but Swaran tells her that she knows that Amber has lied and asks her what she has been doing at Nimmo’s house.