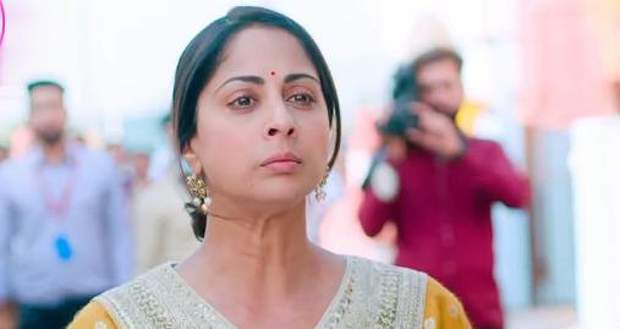 Today's Swaran Ghar 5th April 2022 episode starts with Sharwari asking Swaran what will she do now.

Swaran recalls insurance money and calls the insurance agent, but he also disappoints her.

Meanwhile, Vikram sarcastically asks her whether she is regretting giving money to him.

Swaran tells them that she does not take money from strangers.

Nakul gets irritated at Swaran's stubbornness and tells her that it is not easy to look after such a big house especially when she isn’t that young.

However, Swaran tells them that she has Kanwaljeet’s love with her and that will give her strength which she will use to earn money and look after her household.

Meanwhile, Nimmo is inviting the neighbours for veneration at the beginning of Navratri.

On the other hand, Ajit is reminiscing about past happening while his workers inform him that his orders have been cancelled because of him going to jail.

Later, Swaran is worried that she has not much money in her account and she asks Neelu to find work elsewhere.

Being offended, Neelu remains adamant and does not wish to work elsewhere even if it means working without pay.

Nimmo butters up Nakul, and others by telling them that she is performing this veneration for Aarav and it will also make things better between Swaran and them.

Nimmo is making everyone go against Swaran and also using media as a pawn.

Meanwhile, Swaran is rejected everywhere because of the media scandal.

Ajeet calls Swaran while worrying about her but she rejects her call.

Nikki tells Swaran and Sharwari that she is worried about her daughter and wants to leave her house but has no place where she can stay.

Swaran gets an idea while talking about Nikki's problem and she decides to turn Swaran Ghar into a working women's hostel.