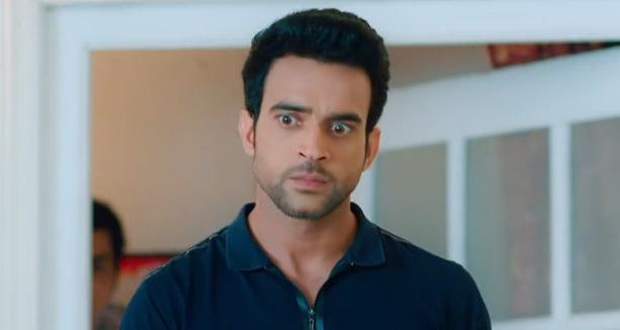 Today's Swaran Ghar 6th April 2022 episode starts with Swaran trying to convince Aarav to go without her but Aarav insists, making Swaran ask Sharwari to take her there.

However, Sharwari’s car gets punctured delaying them.

Swaran is worried about not making Prasad in so little time while Sharawari advises her to buy it from outside.

Soon they come across a stall distributing ‘Prasad’. Swaran tries to buy it but the seller tells her it is free.

Swaran gives him 'Kada' to give to his boss for his generosity.

On the other hand, Panditji begins the veneration while Nimmo tries to collect sympathy for Nakul, Yug and Vikram and taunts Swaran.

Later, Ajit's employee gives him the ‘Kada’ that Swara has given, strengthening Ajit’s belief in a brighter tomorrow.

In the meantime, Nimmo spots Swaran on the balcony while Aarav comes with Sharwari.

Swaran prays to God for strength and guidance, so that she can open her hostel.

Nimmo in her desperation, cuts the stage's rope, making it lose.

Swaran sees the stage lose and spots Sharwari and Aarav right under it.

Swaran runs to Nimmos’ house and drags Sharwari and Aarav in time saving them from the accident.

As per the plan, the reporter comes to her asking her about Ajit.

Instead of thanking her, all the neighbours accuse her of creating the media debacle.

They asks her to leave while Nimmo taunts her as per her plan insulting Swaran while her sons also join them.

All the people go away while Swaran is left standing with tears in her eyes.

Swaran goes to the Goddess Idol when a flower drops down which Swaran takes as a signal from her and becomes happy and vows to be strong.