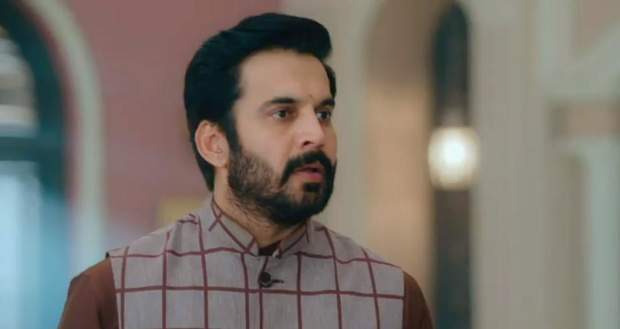 Today's Swaran Ghar 6th May 2022 episode starts with Ginni and others trying to convince Swaran to put the stall of the cream at the fair.

After Swaran refuses to do anything, Ajit suggests Micky and Amber re-enact Swaran and Kanwaljeet in a loving way.

Amber and Micky try to convince Swaran with their skit of Swaran and Kanwaljeet but Swaran asks them to stop.

However, Swaran agrees to the suggestion and re-enacts her conversation with Kanwaljeet making everyone smile.

At that moment, Ginni clicks a photo of Swaran and Ajit together for her project.

Later, Swaran and others prepare the cream and Ajit proposes to bring the materials required.

Ginni lies about going to the stationery store so that she can print Ajit and Swaran’s photos but Ajit tells her that he will take her there.

As they come out of the house, Ginni rushes without Ajit while he gets distracted from seeing Vikram going to his village.

Ajit asks his worker to deliver the things to Swaran and starts following Vikram on his scooter.

Vikram reaches the photo studio and mistakenly drops the photo which Ajit notices and takes his steps to pick it up.

However, Swaran calls Ajit at that time and tells him to rush home as Jay has come to see him.

Ajit returns while Vikram picks up the photo and goes inside the studio.

On reaching home, Ajit gets to know that his daughter-in-law is coming home which means he has to go back home.

Swaran also suggests Ajit return to his home as his staying there is not appropriate.

Elsewhere, Vikram discovers Ajit and Swaran’s marriage through an apprentice who attended their marriage in the past.