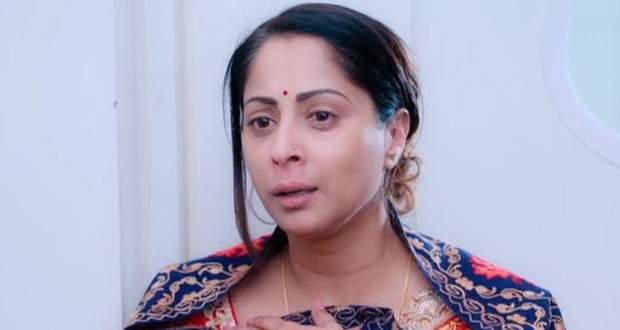 Swaran says that he has just returned from the hospital and should take some rest, while Kanwaljeet insists and Swaran's friends also agree to help them in arrangements.

Meanwhile, Nimmo calls Kiran and says her in-laws (Swaran and Kanwaljeet) are arranging a party but they say they don't have any money for Kanwaljeet’s treatments.

Meanwhile, in the U.S, Nakul and Vikram quarrel with each other about their share and money and how they are facing financial issues.

Later, at Swaran Ghar, Kanwaljeet notices that Swaran is not wearing her gold bangles.

Being asked about her jewelry Swaran makes an excuse that it does not fit her anymore.

Swaran also made a sacrifice by not purchasing her diabetes medicines due to money scarcity.

To lighten up Kanwaljeet’s mood Swaran gifts him a pair of cufflinks, Swaran feels grateful to her husband and she reminisces their initial days of marriage.

Lovestruck Kanwaljeet kisses Swaran on her cheek, while Swaran blushes.

On the other hand, Yug receives a call from his brothers while they nag about coming to India for Kanwaljeet's treatment.

Yug gives them a piece of shocking news about his robbery and how he has no money left with him.

Later that day, Nimmo poisons Kiran with her greedy intentions on how big Swaran Ghar is.

The cascade of poisoning starts and Kiran tells this plan to Vikram and how each of them can get five crores.

Later they send a property agent to Swaran Ghar, which boils Swaran’s ego and disturbs her solitude.

Meanwhile, Kanwaljeet calls his lawyer and asks him to keep the papers ready.