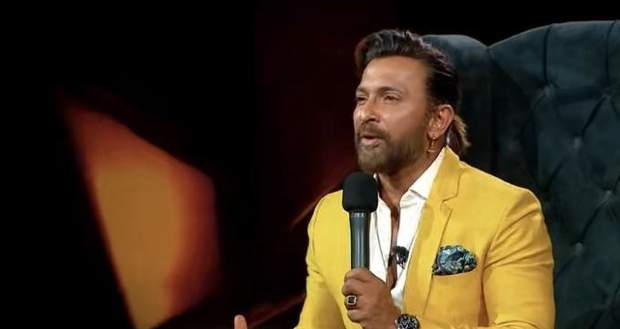 Today's Swayamvar Mika Di Vohti 11th July 2022 episode starts with Shaan announcing that Akanksha Puri will be coming to the show as a wild card entry, who has known Mika for a long time now.

Prantika gets jealous that all her efforts might be going to waste now that another girl has entered.

Busra wonders that if Akanksha has liked Mika for so long then why did she not propose to him before.

Shaan invites a famous photographer, Avinash Gowarikar to the show, who clicks a bunch of photos of Mika with all the brides individually.

Shaan asks Avinash to let him know which bride looks the best with Mika on screen.

Akanksha has a shoot with him first and Mika feels like his chemistry was the best with her.

Reminiscing about their past, he sings a song that he had written years ago just for Akanksha.

Dhwani comes next, and Avinash asks them to show their real-life chemistry in the photos.

Dhwani also sings a song for him after their shoot is finished.

Next, Chandrani enters and Avinash tells them about the importance of body language in photoshoots.

Busra comes after that and Mika asks her to control her temper in the future.

Manpreet wanted her photoshoot to bring out Mika’s fun side but Mika was serious most of the time.

When Prantika enters, Mika tells Avinash that she is his favourite among the brides.

After all the shots are done, Avinash tells Mika that he had the most fun shooting with Prantika and Riya but the most romantic shoot was done with Akanksha.

Mika decides to take Akanksha on a date where the date was set up in a vintage decorated car.

They talk about how they’ve known each for so long, and Mika asks about Akanksha’s past relationship.

She tells him how she wasted time with someone in her past and wants a better person now.

Akanksha gets emotional and seeing her Mika gets sad as well, but he tries to improve her mood by singing for her.