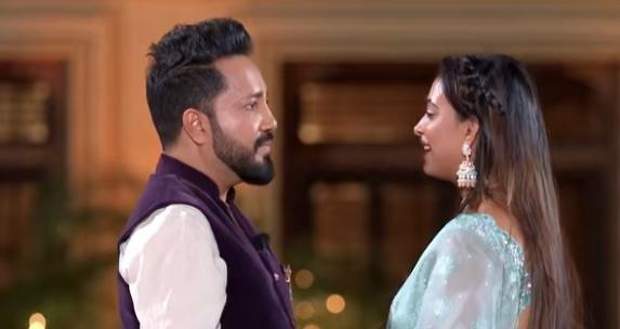 Today's Swayamvar Mika Di Vohti 12th July 2022 episode starts with all the brides gathering for the elimination round.

Dhwani is called up first and Mika says that her journey with him ends here today so Dhwani gets eliminated.

Shaan calls up Neet, and Mika says that they both need to know each other more and Mika tells her she’s safe.

Akanksha is also saved by Mika but Chandrani feels jealous because there are other brides who have put in more effort than Akanksha and deserve to be here instead of her.

Riya is also safe and feels like Chandrani is not too into the game.

Mika saves Chandrani but Prantika says Chandrani does not deserve to be here.

Manpreet is also safe and wants Busra to leave because of her negative energy.

Mika tells Busra that she is always fighting with others but never fights for him, and that is why she gets eliminated.

Neet feels like Busra had to leave because she is always trying to bring other girls down.

Shaan announces that Mika’s chemistry with the brides would be tested today through dance, and invited choreographer Terrence Lewis to the show to train the brides.

Terrence plays a song and asks the girls to do freestyle with him.

He dances with Chandrani and gives her tips on how to use her saree in the dance moves.

Next, Prantika dances with him but Akanksha feels like Prantika’s professional dance skills are not showing through today and Terrence tells her to loosen up a bit.

Manpreet dances with Terrence on a Punjabi song and has fun with him while performing.

Terrence shows the girls how to ‘dip’ while dancing and asks Riya to dance with him next, who has great chemistry with him.

Terrence and Akanksha give a very sensual performance next and Riya feels like it was too intense and, in her opinion, Akanksha forgot that she’s here for Mika, not Terrence.

Riya felt like Terrence gave them a lot of important tips for their next task.

Terrence asks them all to pick a song for their choreography and they’re all confused about which song to pick.

© Copyright tellybest.com, 2022, 2023. All Rights Reserved. Unauthorized use and/or duplication of any material from tellybest.com without written permission is strictly prohibited.
Cached Saved on: Wednesday 25th of January 2023 06:18:17 PMCached Disp on: Sunday 5th of February 2023 12:46:32 PM