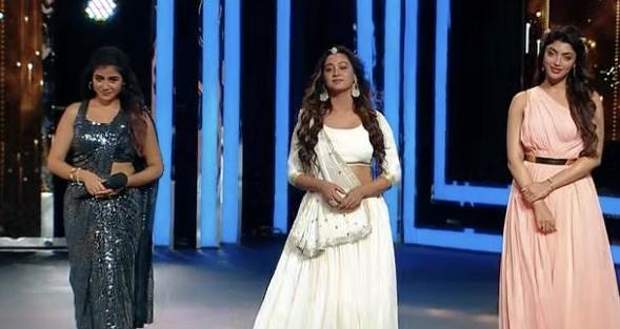 Today's Swayamvar Mika Di Vohti 13th July 2022 episode starts with the dance competition among the brides that would be judged by choreographer Terrence Lewis.

Chandrani is called first and she gives a sensual performance with Mika on the song ‘Ang Laga De’.

Terrence really liked their performance and says that Chandrani moved like an actress today.

Prantika says that this was not at all expected from Chandrani because nobody has seen her like this before, and Neet says that she’s feeling insecure about Chandrani.

Prantika performs next on the song ‘Meri Jaan’ with Mika, and Terrence appreciates their chemistry.

Manpreet feels like Chandrani’s performance was better than Prantika's and Riya feels Prantika’s chemistry was not that great.

Manpreet performs with Mika on ‘Yeh Mera Dil Yaar ka Deewana’ and Terrence feels like she was very confident with her dance.

Prantika feels like Manpreet was shaking and showing off too much during her performance and Neet agrees with her.

Akanksha says that it seemed like a solo performance of Manpreet rather than dancing with Mika.

After that, Neet dances on ‘Tujh Mein Rab Dikhta Hai’ with Mika while enacting a Karva Chauth scene.

Terrence says that he liked Neet’s concept and song choice but the performance could have been better.

Manpreet says that Neet took a shortcut to Karva Chauth by doing this performance and there was no dance in it.

Akanksha performs next on ‘Hum Tum’ with Mika and Terrence says that their chemistry was great.

Neet feels like Akanksha has an added advantage in everything due to her friendship with Mika.

In the next performance, Riya dances with Mika on ‘Tip Tip Barsa Paani’ and Terrence calls their dance hot and sensual.

After all the performances are over, Terrence asks Mika to select the best performance amongst all.

Mika takes his gold chain off and puts it on Riya’s neck which means he liked her dance the most.

Terrence agrees with Mika’s choice but the other girls are jealous of Riya.