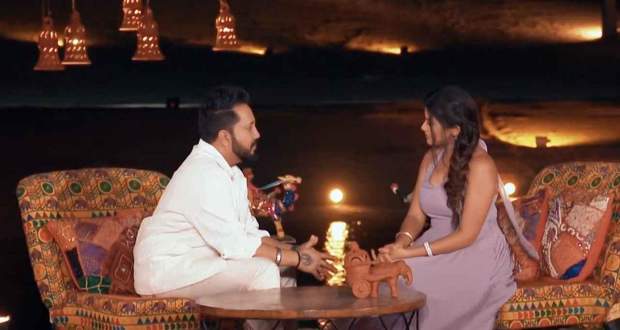 He says he’ll spend some time separately with all of them today and their dates are set up in the desert.

While the dates go on, other brides also watch while sitting on the side.

He goes on a date with Chandrani first and Chandrani tells him that she’s not playing games like other girls.

When Mika asks her why she chose him, Chandrani says she wanted to marry someone outside her profession.

The other girls feel like Chandrani’s date is slow and boring.

Next, he invites Prantika and says he likes her because she makes him feel like a child as well.

Riya says their date was very childish and they don’t seem like a couple.

Akanksha says their date was quite funny but she still considers Prantika a strong competitor.

Riya is invited for the date next and Mika says that she must have met a lot of good-looking men before him, to which she replies that she cares more about a man’s personality.

Mika appreciates how expressive Riya is and comments on how Chandrani wasn’t expressive at all.

Chandrani says that Riya is two-faced and pretends to be someone else in front of Mika.

Manpreet comes next and Prantika calls her pretentious.

Manpreet says that she only got to know about Mika after his close friends came to the show and talked about him.

Mika says that his friendship with Manpreet is quite strong but there is no love yet.

When Neet comes, Mika says he likes how mature she is and he sings for Neet while she sits on his lap.

After all the dates end, Shaan tells Mika that he has to eliminate two girls now and post that, he’ll be visiting the homes of all the remaining girls.

Mika calls up Prantika and Neet and asks them to return their bangles.

Riya is called up first and Mika says that he’s afraid that Riya’s only acting and doubts her feelings for him, but tells her she’s safe anyway.

Mika asks Manpreet to come next and he tells her that they’re not made to be life partners and she gets eliminated.

Neet and Chandrani are called together and Mika saves Neet, which means Chandrani gets eliminated.

After that, he gives the bangle he took from Prantika back to her and also returns Neet’s bangle.

© Copyright tellybest.com, 2020, 2021. All Rights Reserved. Unauthorized use and/or duplication of any material from tellybest.com without written permission is strictly prohibited.
Cached Saved on: Sunday 2nd of October 2022 06:09:41 AMCached Disp on: Wednesday 5th of October 2022 04:38:27 PM